The new Mk8 Volkswagen Golf has been revealed estate and Alltrack form, adding more standard kit and practicality to the mix 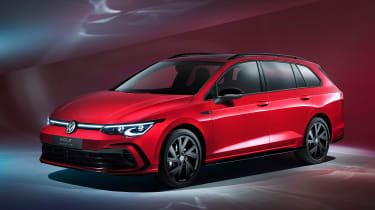 The new eight-generation Golf hasn’t been on our roads for long, but Volkswagen has already launched a more practical estate variant alongside the rugged Alltrack. Both new variants will join the hatchback in the range later this year, with UK pricing and specifications still to be announced.

The Golf hatchback has long been the ideal family car for many, but for those wishing for a little more space without the need of trading up to an SUV, the estate variant has become a popular alternative. In this eighth generation estate, VW has increased the hatchback’s wheelbase increasing room for rear-seat passengers, while the 349mm increase in overall length compared to the hatch liberates extra cargo space.

As with the hatchback, the cabin has received a complete overhaul over the previous-generation car, with the majority of physical buttons replaced by digital interfaces that comprise a digital cockpit and 10” infotainment display. Over-the-air updates also allow features such as adaptive cruise control, ‘Light Assist main-beam control’ and a Wi-Fi hotspot to be added at any stage.

The same low-set headlights are carried across from the hatchback, with optional IQ.Light LED matrix units available on higher grades. Four trim levels will be offered at launch ranging from ‘Golf’ through to the range-topping ‘R-Line’; elements such as tinted rear glass, larger wheels and more aggressive front and rear bumpers come with the latter. 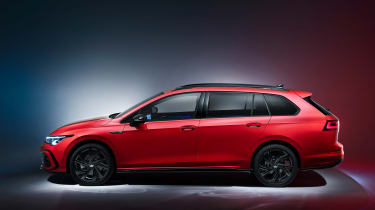 Standard powertrains are the usual mix of VW’s three- and four-cylinder petrol and diesel options, but VW will also offer a 48V mild-hybrid eTSI powertrain that pairs with a standard dual-clutch transmission. The system acts in the same way as other MHEV systems, both reducing fuel consumption and improving response.

The range will eventually be topped by an R model, which will adopt the same powertrain and chassis upgrades as the forthcoming hatch. Specific details are yet to be confirmed from VW, however the model will likely share the same powertrain as the recent Arteon and Tiguan R. Both of those models feature a new evo4 iteration of the EA888 2.0-litre turbocharged four-pot, producing a healthy 315bhp and 310lb ft of torque. 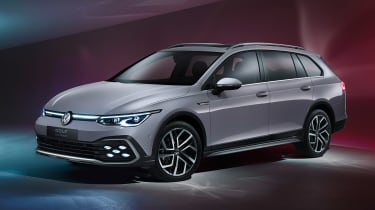 Launched alongside the estate is the new Golf Alltrack, a rugged blend of hatchback and SUV. Available only with 4Motion all-wheel drive, the model features an increase in ground clearance for mild offroading, the trademark black plastic exterior trim and a redesigned cabin to match the brief.

Volkswagen will launch the new Golf Estate and Alltrack in Q4 of 2020. Pricing hasn’t been announced, however the Mk8 Golf hatchback starts from £23,300.