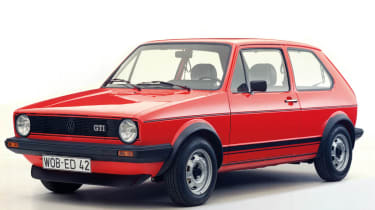 Ask any performance car enthusiast under 35 what their first fast car was and there’s a good chance they will respond with the name of a hot hatch of some kind. But their answer would be very different if they’d had to buy their first serious set of wheels in the early ’70s, because the hot hatch had yet to be invented.

The hatchback itself was a rarity back then. There was the Renault 4 and 16, and the Austin Maxi, but it was the arrival of Volkswagen’s Golf in 1974 that started the revolution. Designed to replace the Beetle, which had been around for over 35 years, the Golf couldn’t have been more different to its predecessor. It was front-engined (1093cc and 1471cc in-line four-cylinder units were the options, with 50 and 75bhp respectively), front-wheel drive and sported ‘folded paper’ looks that were the work of Giorgetto Giugiaro, who had been tasked with styling a range of new models for VW that would also include the first-generation Scirocco and Passat.

But the Golf was never meant to be a performance car. It was supposed to be a small, fuel-efficient model – just the kind of thing people would be looking for in the aftermath of an oil crisis. Fortunately, VW engineer Alfons Löwenberg saw the potential and gathered together a small group of like-minded colleagues at Wolfsburg to begin work – in their spare time – on what they would call the Sport Golf.

Their first prototype was in fact based on a Scirocco, not a Golf (the two cars shared the same underpinnings), but with a 100bhp version of the Audi 80 GT’s 1588cc engine, a barely silenced exhaust and race-car-firm suspension. It certainly showed what the platform was capable of, but the team decided it was also too extreme to present to management as a potential production model, so when the prototype was eventually demonstrated to VW’s top brass at the company’s Ehra-Lessien test facility it was in a far more civilised state of tune. It was still like nothing else on the road, though, and the bosses loved it.

‘The fastest Volkswagen ever’ made its public debut at the 1975 Frankfurt motor show. Amongst the details that marked it out from the basic Golfs were a chin spoiler (the only aerodynamic add-on, required to increase front-end downforce at high speed), black side stripes, black plastic wheelarch extensions and a red pinstripe around the grille. Inside there were sports seats with tartan upholstery, black headlining and a gearknob that resembled a golf ball – even though the Golf was named not after the sport but, as with many other VWs, a wind, in this case the Golfstrom or Gulf Stream.

The car also wore new badges bearing the initials GTI, ‘GT’ standing for gran turismo, ‘I’ for injection (or, continuing the Italian, iniezione), referring to the adoption of Bosch K-Jetronic fuel injection in place of the carburettor originally fitted to the Audi engine. Along with further mods that included larger inlet valves and a higher compression ratio, this enabled the 1.6-litre engine to produce 108bhp at 6100rpm and 103lb ft at 5000rpm. With a kerb weight of just 810kg, the GTI could get to 60mph in 9 seconds. Top speed was 110mph.

Available only as a three-door, the Golf GTI went on sale in Germany in June 1976. A handful of special-order left-hand-drive cars started to come to the UK the following year, but it wasn’t until July 1979 that the first right-hand-drive GTIs arrived. Combining performance, convenience and affordability, they were an instant hit. By the end of the year more than 1500 had been sold, and as the hot Golf’s popularity continued to grow, a host of imitators soon followed from rivals such as Ford, Peugeot, Renault and Vauxhall. But the VW would remain the benchmark against which all hot hatches would be measured for years to come. As the car that invented the genre, that seems only right.