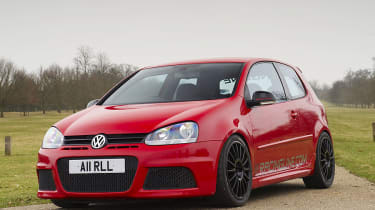 With a decade of running VW’s UK operation behind them, Racingline has employed all its hard-won knowledge and experience and produced a tuned road-going Mark V Golf that has the potential to wind up a few Porsche owners on a trackday. For starters, the motor now has 320bhp, while the chassis has undergone the level of revision only usually witnessed on their racecars. The only appropriate thing to do was to drive it from their Milton Keynes base to Bedford and join in on one of the Autodrome’s regular trackdays.

Sitting outside Racingline’s workshops just around the corner from VW’s UK head office the 300R looks unquestionably like a race car, sitting almost impossibly low over 19-inch wheels and specialist Hankook Ventus trackday tyres. It’s weird but when Golf’s are lowered, they always seem bigger to me, an optical illusion created by the rear arches that appear to flare more when hunkered down over low-profile rubber. The bodywork has been finished with spokes that allow geater amounts of air to reach the radiator and brakes. Though the front spokes you can see massive 355mm ventilated brake discs with four-pot calipers taken straight from the racecars, so they should be well up to the task of taking on a trackday unlike the standard GTI, which suffers from fade. How efficient they are on the road we’re about to find out…

Inside, the Racingline team have kept things standard, although you could, of course, choose to fit competition seats and harnesses or even go the whole hog and fit a cage but that would remove the practicality and dual-purpose nature of the 300R. Flick and twist the key and the engine fires with a deeper burble that adds purpose but not too much volume – important as Bedford runs to a strict 87dB drive-by limit. The engine has been the subject of a lot of discussion in Racingline HQ during its 18-month gestation period. They could have aimed for an output far closer to 400bhp than the 320 they finally settled on, but did so because they wanted to retain driveability, acceptable fuel economy (mid-twenties) and reliability. VW engineers informed them that drivetrain tolerances would be exceeded if they climbed above this mark. And anyway, combined with the weight they had removed from the package 320bhp is plenty.

On the road the flexibility is immediately apparent, there’s no lumpy idle and delivery is surprisingly linear. At rest you notice the gentle thrum through the chassis created by solid engine mounts and it’s the first time you notice the extra tautness that runs through the whole car. The second time is when you select first with the short-throw gearbox, the clutch is standard (others were tried but where too heavy and clumsy) and the gear snicks into place with no slack or inefficiency. Torque is limited in the first couple of gears to stop you disappearing in plumes of tyre smoke but once in its stride power pours on with remarkable strength.

The ride, perhaps unsurprisingly, is pretty stiff side and can become a little uncomfortable on broken surfaces, but then racecars have never been designed to smooth out road ripples like an old Jaguar. The standard bushes have been junked in favour of more solid racing versions and the damper top mounts have had the rubber bits replaced by solid alloy. The dampers themselves have been welded with a bend in the body so that the camber angle can be increased to -3.5 degrees to give more front end bite and to allow larger wheels to be fitted than would otherwise be possible with such a low ride height. The springs are some 20mm longer than the racecars to make its road manners bearable on back roads and perfectly acceptable on main highways.

By the time I arrive at Bedford the integrity of the work has been proved without question and the package feels both balanced and exploitable on the road. The brakes provide huge stopping power without squeal or cold temperature issues, while corners were dispatched at huge speed with no fuss at all. In the pitlane the trackday is already a few hours old and it’s buzzing with an eclectic mix of early season drivers. There’s everything from home built kit cars of dubious quality and battered Peugeot 205s through to 911 turbos and race-prepared rice rockets. This should be fun.

We’re using the GT circuit, the longest of all the track set ups combining all the shorter loops and the best bits of the each of the tracks that are usually run individually. After a lap to bring everything up to temperature I begin leaning on the Hankooks and running revs up to its power peak and I’m immediately reeling in the rest of the traffic in double quick time. Through the quick corners it feels exactly as you’d expect from race engineers, it corners flat with an aggressive front end and progressive adjustability, thing is it feels much quicker than it might if you were strapped into a stripped and caged racer. It almost feels wrong to be travelling quite so fast when surrounded by a standard Golf interior with regular recoil belts, normal chairs and even a radio. You can’t help but chuckle to yourself as Stuttgart’s finest disappears in your rearview mirror. Don’t believe me? Well check out the video and see for yourself.

With the level of modification seen here the whole conversion comes in at £12,000, but of course you can pick and choose various elements if your pockets or ambition won’t stretch to the full package. You can of course start with a second-hand car and if you’re a regular trackday driver who can live with the firm on-road ride then the Racingline Golf is very tempting indeed.