We drive the new Volkswagen Jetta. Is it a Golf with a boot, or something more special? 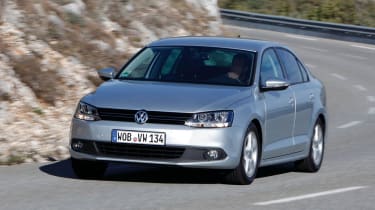 The Volkswagen Jetta is not a Golf with a boot any more. Oh no. Perish the thought. Well, under its unique skin it broadly is, except that this time the wheelbase grows by 70mm to the great benefit of visual proportions and rear seat space. It's still smaller than a Passat, and apart from a Ford Focus saloon there really aren't many rivals for this size of notchback any more. There's always the Peugeot 408 (a booted 308), but only if you live in China.

The Jetta has always been a hit in the US, where all six generations have borne the name. Vento and Bora names variously intervened over here, but now the saloon is back to its roots. This latest one is made in Mexico, but gains Golf-type multiple-link rear suspension (it's a torsion beam in the Americas), higher-tech engines and fractionally higher perceived quality for Europe.

All engines have direct injection and a turbocharger. For the UK these are VW's usual pair of petrol 1.4s with either 120 or 158bhp, the latter augmented by a supercharger, or a 1.6bhp/103bhp diesel with a tall-geared five-speed gearbox and BlueMotion economy stuff (109g/km CO2, thank you taxman) and a 138bhp 2.0 derv-burner. We don't get the 1.2 TSI, which is a shame because it's a gutsy little unit. That eco stuff includes stop-start and an alternator which normally charges only when the Jetta is slowing down.

VW says the Jetta is pitched upmarket of the Golf, but you'd never guess. Its dashboard is as dull a design as a dashboard can reasonably be, and the door trims are formed of hard plastic right up to the windowline like a Polo's. A Golf gets padding here, and in a car with any sort of quality pretensions it's essential. The Jetta was conceived as an affordable, high-sales car for the US and these origins are all too clear. At least we are spared the US-spec hard dashboard moulding; ours is padded.

Driving it softens the shock slightly. We drove the two diesels, of which the 1.6 was quite gruff and not very lively, the 2.0 was much more refined and pulled with some verve. Its optional DSG gearbox worked effectively of its type but lacked paddles. There were no petrol 1.4s to try on the launch, strangely – the 158bhp one would have been the sole Jetta with any hint of evoness – but the 1.2 TSI felt quite keen and had a deliciously slick gearshift. All the test cars handled tidily enough, had a rubbery steering response around the straight-ahead and felt firm over bumps. Competent, then, but not inspiring; think Golf but more lugubrious.

Depends what you're comparing it with. Pricing will be similar to that of same-engined Golfs, so you're trading perceived quality for rear space and a boot. A new Ford Focus saloon will feel more sophisticated, a Skoda Octavia – similar size and underpinnings but a long-tailed hatchback – feels more special. Really.

Only that we can't quite grasp what this car is for. It looks quite smart, and will no doubt go down well in Spain and Turkey and other markets which favour saloons. But to us, it's a bit of a social misfit, an American-German car that's clearly cheap to produce. For Volkswagen to try to sell it as a convincing part of the European range is just cynical.

The Volkswagen Jetta is available now from £18,815.