Volkswagen Polo GTI review - minature GTI has the power but can it deliver fun? - Performance and 0-60 time 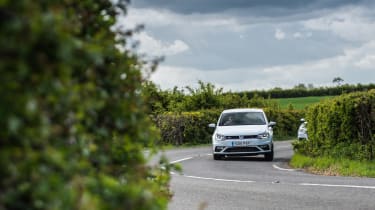 The Polo GTI is powered by VW’s 1.8-litre TSi turbocharged four-cylinder engine, replacing the out going model’s turbocharged and supercharged 1.4-litre motor. It produces 189bhp at 4200rpm (up 11bhp on its predecessor) and 236lb ft of torque at 1450rpm. It’s not the most involving engine or inviting to work hard, and once the burst of torque has arrived you wait for the power to build and the pace to pick up.

While it feels quick enough, the engine never feels as alive as its rivals and you’re often left waiting for more when the Polo has given its all. For a hot hatch, its engine feels merely warm.

VW claims an identical 6.7sec 0-62mph time no mater if you have the standard six-speed manual or optional seven-speed DSG fitted, which feels about right for this 1272kg hot hatch. 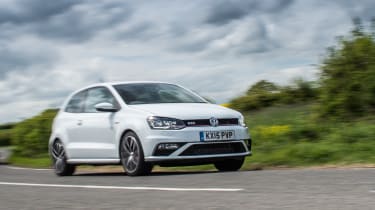 A sudden surge of torque low in the rev range helps get the Polo off the line cleanly. The gearing doesn’t feel perfectly mated for out and out acceleration, with the ratio change from second to third feeling like you’ve selected fourth by mistake. The engine drops out of its power band and there’s a significant delay before it gets back on song.

At higher speeds (it maxes out at 147mph) the Polo GTI maintains momentum more easily with the higher ratios better matched to the engine’s mapping and you start to get into the GTI’s peak performance window. There’s little to be had from revving it out to its maximum engine speed, though, so better to take another gear as the power peaks.

A quiet and smooth engine, it neither feels, nor sounds like a performance hot hatch’s motor should and you get the sense VW has held back for possible future high performance models. The Polo’ falls short on thrills and firepower.