VW's new 217bhp Polo R-WRC concept has been unveiled, and it will be going into production next year as the Polo R. Details and images here 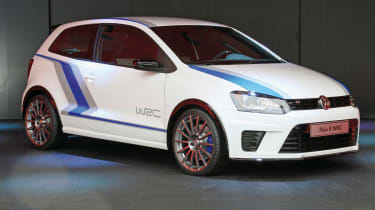 Volkswagen has unveiled the 217bhp Polo R-WRC at the Worthersee tuning show, confirming that the prototype will go into production next year under the Polo R nametag, in limited numbers.

Under the bonnet, VW has fitted a twin-charged (supercharged and turbocharged) 2.0-litre TSI engine, which will produce 217bhp – more than the 208bhp engine in the Golf GTI and a significant boost over the 1.4 178bhp Polo GTI. Styling upgrades include the new bodykit, huge wheels and the R-WRC badging.

The Polo R-WRC is only one of Volkswagen’s attractions at the increasingly important Austrian tuning festival, with the full-blown 296bhp 1.6-litre Polo WRC car, and a pair of special edition Golfs on the stand along side.