The popular Volkswagen Tiguan has been updated, and revealed in new R and e-hybrid forms 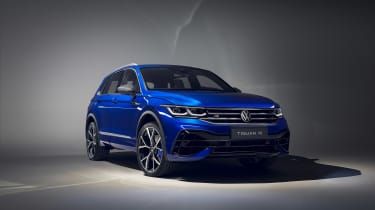 The Volkswagen Tiguan did something quite remarkable in the year 2018. It, rather than the Golf, was Volkswagen’s highest-selling single model. This came despite the Golf having one of the most recognisable names in the business with over 45 years of consistent market presence, yet such is the power of SUVs (especially in markets outside of Europe) that the Tiguan managed to grab that top spot. As such, it comes as little surprise to see Volkswagen making the most of this market trend by expanding the Tiguan range during its midlife update with new eco-friendly e-hybrid models, and a flagship R model.

The Tiguan’s core engine range will be mostly unchanged, consisting of VW’s new 1.5-litre EVO and 2-litre turbocharged petrol fours. Also in the range is a 2-litre turbo diesel, which is now fitted with the latest dual-stage catalytic reduction system that significantly reduces the amount of nitrogen oxides produced at different stages of combustion. These standard engines will be available with either a six-speed manual or seven-speed dual-clutch transmission, and either front-wheel drive or 4Motion all-wheel drive, model depending. 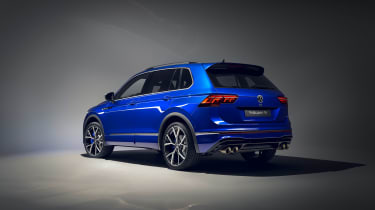 It’s the e-hybrid and R models that are new for the Tiguan though, with the plug-in featuring the same 1.4-litre turbocharged four-cylinder engine and 13.1kWh battery pack as already seen on the Golf GTE and incoming Arteon e-hybrid. Total system power of the powertrain is 242bhp, it’s capable of a 30-mile electric range, and power goes to the front wheels via a specially designed six-speed dual-clutch transmission.

The Tiguan R takes things in the other direction, with an identical powertrain and drivetrain to the recently revealed Arteon R and the incoming Golf R. This means it’s powered by the evo4 update of the EA888 2-litre turbocharged four-cylinder petrol engine producing 318bhp, with 320lb ft of torque. Power is sent via a seven-speed dual-clutch transmission to all four wheels, with the Arteon’s ‘torque splitter’ torque vectoring clutch pack on the rear axle – a first on a performance-oriented SUV like this. 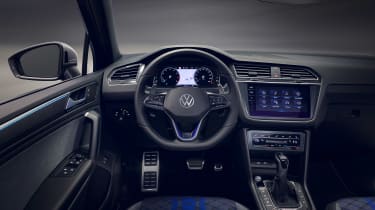 The Tiguan R has also picked up a range of chassis upgrades, sitting 10mm lower on standard adaptive dampers, including an upgraded braking pack behind a set of 21-inch wheels, changeable driver modes and an optional Akrapovic titanium exhaust. The Tiguan R also features other bespoke styling accoutrements around the exterior and interior, the latter highlighted by some bespoke bucket seats, ‘R’ steering wheel and large shift paddles behind.

Across the range at large, the Tiguan has also been updated inside, with new digital interfaces on the dash and instrument cluster, while the air conditioning controls have been swapped over to the latest touch-control system also seen in the Arteon. Outside, new model-specific design elements create a bigger differentiation between specific models, while the lighting at both ends has been updated to VW’s latest ID systems, with dynamic indicators and brake lights, Matrix headlight beams and a new lighting signature shared with the Mk8 Golf. 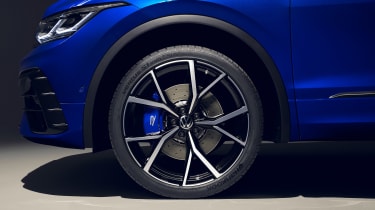 While the interior changes are certainly welcome, the Tiguan’s relative age compared to that of the new Golf does mean it misses out on the much cleaner and more streamlined interior ambiance of the new Golf.

The new Tiguan will arrive in the UK later this year, with VW focusing on core models first, before rolling out the new e-hybrid and R models later. Local prices and final specifications have yet to be confirmed, but the Tiguan R will need to be priced above its smaller T-Roc R sibling, which already starts at over £40,000, while keeping below the Audi RSQ3 at just under £51,000.