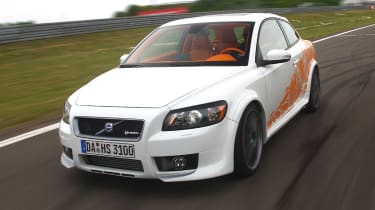 Even Volvo admits the C30 hasn’t been the rollicking success the firm was hoping for. Perhaps a more focused range topper would help? At least that’s the thinking of Heico Sportiv, the German firm bidding to become Volvo’s official tuner.

And, hey presto, it’s come up with this, the C30 Heico. By giving the turbocharged 2.5-litre engine a larger intercooler and fiddling with the ECU, power is up by 29bhp to 256bhp, torque by 44lb ft to 280. That trims the 0-62mph time from 6.7sec to 6.0, but where you really notice the difference is that the improved torque is accessible through more of the rev range.

So that all that work on the engine isn’t translated into wayward torque steer, a limited-slip diff has also been added. Brakes are uprated too, with ATE discs and pads providing superb stopping power even after prolonged use. So it stops and goes very well indeed, it’s the bit in between where this C30 is found wanting.

Lowering the suspension by 35mm helps reduce body roll, but like a regular T5 model this car still doesn’t give as much back to its driver as other similarly priced hot hatches. The clutch travel is long and the six-speed gearbox responds to being hurried with a frustrating vagueness. And while the C30 shares its chassis with the Ford Focus, through the corners it still has none of that car’s agility or adjustability.

You can pick and choose the Heico parts you want, but a new C30 T5 with the full complement of the company’s performance upgrades would set you back around £30K. The result is a car that is definitely sportier than a regular T5, but Heico would have been better off working on further honing the handling and controls rather than adding more power.