A new T5 engine underpins Volvo's compact executive car and it's rather good. What about the rest of the car? 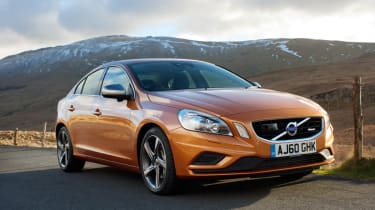 Not the T6 engine, but the T5 – which is now no longer the charismatic five cylinder 2.5, but an equally powerful 2.0-litre four. Volvo are playing its origins down, but I suspect it has a lot in common with the Ford Ecoboost unit fitted in the S-MAX and destined for the next Focus ST. What is unique to Volvo is that the turbo is fully integrated into the exhaust manifold and is made of sheet steel rather than cast. This apparently lowers heat radiation, allows higher gas temperatures, leading to more efficient combustion and better low rev pick up.

I preferred the T5 saloon to the T6 estate – although this may well have something to do with the T5 having a halfway decent manual gearbox (not one to be rushed though), and the T6 being hamstrung by a rather lazy auto.

The trouble is the T6 is not a sporting engine anyway, taking a while to get into its stride. The T5 is much more impressive. For starters the turbo spools up very fast indeed and unlike most modern turbos, doesn’t settle for blowing hard up to 3000rpm and then backing off in a very diesel-y way.

Here it feels a little flat low down, torque building progressively across the rev range. Above 5000rpm it’s great, giving you a real reason to hang on before changing gear. It even sounds enticing at the top end. Well, slightly.

But the S60 feels heavy, not quite 0-60mph in 6.9secs fast and although the chassis in both cars is more tenacious, grippy and pointed than you might expect, the control interfaces don’t reflect that at all. Worst is the springy, imprecise steering. You turn in and the car holds a decent line, but due to the speed sensitive, variable assistance steering, power assistance comes and goes through a corner, making it hard to hold an even input with your arms.

As with the V50 DrivE, there’s a bit of tyre grumble, but Volvo has improved its suspension insulation and body control in recent years.

Both are very nicely styled  – especially the estate – and have really good driving environments. Personally I prefer Volvo’s interior design to Audi’s, BMW’s or Merc’s. It’s fresher, cleaner. The Ikea analogy sells it short – think cool Swedish high end furniture and you’re much closer. But are they better cars? From an Evo standpoint, no. If you care about driving you’d have a 3-Series saloon or Touring every time, but if you care about your family and comfort, then it’s a whole different ballgame.

And then I drove the XC60. It’s always nice to drive a car that exceeds your expectations, but I wasn’t prepared for the XC60 SUV to have significantly better steering than the S60/V60 (more accurate, far better weighted), plus a surprisingly nimble nature. It was tall, manageably sized and rather nice. Still no driver’s car, though.