Maserati Ghibli review - can the Italian exec live with the German elite? - Engine and gearbox

Charismatic, good looking and distinctive - but lacking in substance compared to German rivals 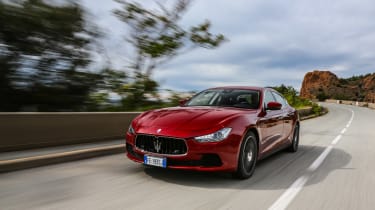 The Ghibli's unique selling point of Ferrari-built engines is a pretty enticing one in this class, and the petrol units are indeed assembled in the same Modenese factory, but aside from location they share little else with Ferrari's own units. The two 60 degree V6 engines are both turbocharged and are connected exclusively with an 8-speed ZF-sourced automatic gearbox.

Unlike the exotic transaxle V8 drivetrain of the previous Quattroporte, the Ghibli’s set up is decidedly more ordinary, but don’t think that all the Italian fire has been lost as a result. Both petrol powered V6s share a raspy soundtrack that helps support the tenuous Ferrari connection. 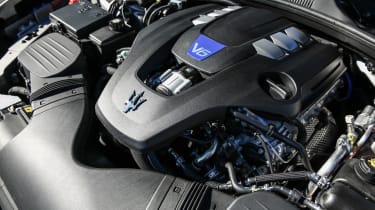 The entry-level petrol engine was recently upgraded to 345bhp in the 2017 refresh and remains a strong performer, even if it is not an entirely relevant engine here in the UK. The more powerful unit in the S produces a stout 414bhp, but performance is brisk rather than seriously fast.

Maserati’s pride in Ferrari’s involvement does not apply when the diesel is mentioned though, as it’s sourced from the other side of the FCA group entirely. The Jeep sourced 3.0-litre diesel engine produces respectable power and torque figures with 271bhp and 443lb ft, but is outclassed where economy is concerned, claiming 47.8mpg on the combined cycle which is a fair way away from class leaders.

The gearbox is well executed in typical ZF fashion but despite a Q4 all-wheel drive system being available overseas, it is not an option for UK buyers thanks to packaging constraints in right-hand drive models.