If a hillclimb sounds like something your 73-year old neighbour would do in his Triumph Vitesse, think again… 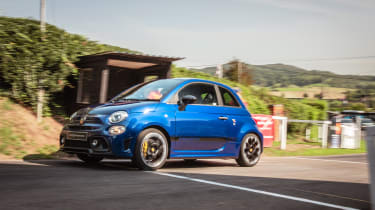 The great British hillclimb. It seems a type of motorsport formed in a different time, one built on a deep heritage of tradition and filing the contact points in your distributor cap. We’re at Shelsley Walsh, perhaps one of the most auspicious hillclimbs in the UK, which was founded in 1905, and has been run ever since by the Midland Automobile Club.

The course is exactly 1000 yards in length and rises 100m into the undulating Worcestershire landscape. It was originally nothing more than a driveway up from the road to the homestead of the surrounding farm, of which still sits in view of the top paddock. The picturesque hills and sweet out-buildings are about as British an image as one might imagine; a pleasing contrast to the notion of fire-spitting hill-climb racers.

We’re here with a slightly more sensible set of wheels however, in this case an Abarth 595 Competitzione, to run up the hill in challenge of setting the outright record. Okay, so maybe that won’t happen in a small hot hatchback with underpinnings shared with a 15-year old Fiat Panda, but as a right size-right car experience of a British hillclimb for this novice, it’ll do just fine. 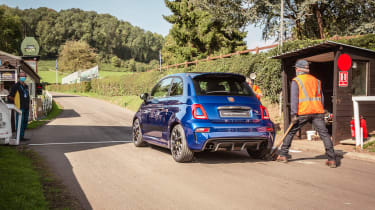 Approach the start line to the far right, the marshal guiding you forward as another lays a wooden chock behind the rear wheel. The starting light is small and a little tricky to see, but we’ve been assured the timing only starts when you cross the laser guide and not when the light goes green, removing that pressure for prompt responses and a good getaway.

Dial up 3500 revs or so, the Abarth’s turbocharged four-cylinder is responsive enough, but not so much that it’s tricky to maintain constant revs. The light goes green, I drop the clutch and let the front wheels spin just enough to stop it bogging down, but still avoiding excessive wheelspin. Finally feel revs correlate to the road-speed and it’s time to snatch an aggressive first-to-second shift as you stick to the right-hand bank of grass approaching the first complex.

The first right is flat, but the late-apex left-hander that immediately follows isn’t. The 595 would probably do it, but it’s torque steer is most prevalent here, making me less keen on accidentally getting into a power-oversteer situation. This also causes me to leave the change to third a tad late as I just about brush the 595’s soft rev limiter on the way out, not wanting to relax my grip on the steering wheel as it fidgets and pulls left-to-right in my hands.

Another gentle left hander, once again I need to place the car to the far left of the narrow tarmac due to another late apex of the following left-hander. The road surface itself  in many of these corners crowns in the center, making the car’s precise placement extremely important as it can be easy to ‘fall’ into the wrong side of the road coming up to the next bend. As the road continues to climb up through a flat right-hander, it’s time to hit the brakes for the first and only time for the tightest section of the climb. 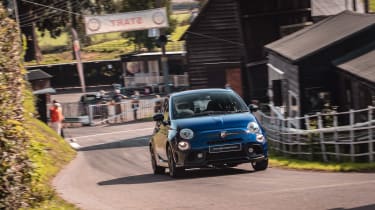 I brake early, the extremely late apex makes the point between braking and turning in feel like a lifetime, the hazards flash, even though I don’t prompt any ABS intervention, and I keep the Abarth tight to the inside bank of the left hander, avoiding the steel drain on the inside of the following uphill right as the officials suggest. The road is crowned here too, and once I’ve turned in patience is required once again as the exit of the corner tightens ever so slightly on exit not leaving an inch of room on the exit.

It’s a straightforward drag to the finish now, and the 595’s torque delivery doesn’t make it necessary to hold onto gears until the bitter end. Cross the line at 76mph in 40.73sec. The record is 22.48sec. I’ll get it next time.