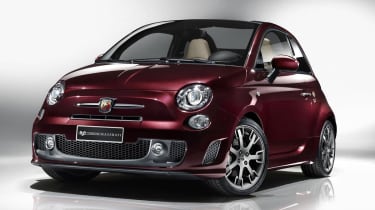 Following on from 695 'Tributo Ferrari' that was launched last year, Fiat has announced this, the 695 Tributo Maserati - due to be launched at the Geneva motor show.

This 695 has been developed with help from Maserati, utilising the standard 178bhp 1.4 Turbo T-Jet engine, along with a paddle-shift gearbox. Maserati has has fitted a new exhaust system, Brembo brake callipers, as well as 17-inch Neptune alloy wheels – similar to those fitted on the GranTurismo S.

The interior has received special attention, with Jaeger LeCoultre dials, a black leather steering wheel and 'Poltrona Frau' leather seats. This is all topped off by a electronically-controlled retractable soft top.

Just 499 will be produced, but prices have yet to be announced.