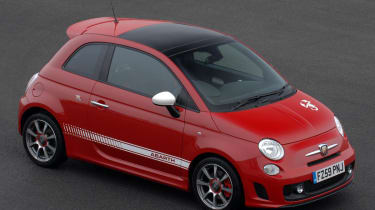 Good news for owners of the Abarth 500. A recent survey has rated it one of the UK’s most depreciation-proof cars, coming in third place behind Audi’s Q5 and the ever-popular Skoda Yeti. The findings, from valuation specialists CAP, are based on cars with 30,000 miles/three years use. CAP suggest that such an example of the Abarth is likely to retain at least 60 per cent of its list price come resale time. Fiat has taken this as proof that its mission to make Abarth a premium brand has been successful. Yet the Abarth is just one place above the 500C, its less sporting, Fiat-badged base model in cabriolet form.  The 500 Abarth and the 500C share the top 10 with some established high-value machinery - Audi’s R8, the Porsche Panamera and VW’s Scirocco all come in below the Italians with values hovering around the 55 per cent mark after three years. This indicates that certain parts of the performance car market are strong, despite the current economic climate. But while the 500 stablemates share the top ten with a host of German and Japanese models, Fiat’s stylish Bravo is found hiding amongst the bottom ten with a resale value of 34.4 per cent - nearly half that of its sporty cousin.