We explain the best limes to take at Castle Combe for rapid lap times. Click on the images for more info 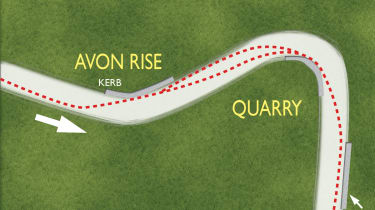 Despite there being very strict noise limits Castle Come continues to be popular with racers, track day drivers and spectactors alike. The high banking may not allow much run-off but the crowd is close to the action, creating a very personal, rewarding experience. The venue's popular with families and the charming olde worlde Castle Combe village is characterful and also worth a visit.Quarry cornerThe approach through Avon rise makes this one of the most challenging corners in the UK. It’s approached at maximum speed and Avon Rise curves and crests just where you want to start braking. This gives you a choice, you either brake just before the crest and release the pedal again as you go over the rise, or you squeeze it on hard and late once the suspension settles after you’ve crossed it. This is dependant on the car and it’s power-to-grip ratio. Those cars that brake early also tend to take the more conventional line into the corner, while those cars that brake later will not be able to get all the over to the left before turning in. The clipping point is late to open out the exit to allow you to get back on the power as early as possible.

The EssesYou can brake later than it first appears because the right-handed first section is faster than the tighter left. In fact many racers don’t brake until the start turning right, trail-braking through the first part of the turn. On the exit some cars don’t run right out to the exit because they need to open out the following curve as much possible to ensure it can be taken flat out. During race meetings plastic posts are positioned just inside the clipping point to prevent corner cutting, so don’t use this extra track when they are not there for test sessions.

Tower CornerAnother fast approach and this time braking is extended because the track is falling downhill. The turn point is later than it might first appear as the corner turns through more than 90 degrees. This also means that the apex is a long way round and there is a drain right there, so this can be used as a marker. Exit speed used to be critical, but this has been reduced by the chicane that follows almost immediately.

BobbiesMost cars tend to be caught between gears as you approach the braking point, so a choice has to made whether to go a short burst of 4th before braking and shifting down to 3rd again or to just hold onto 3rd. The line through the corner is obvious but the exit is crucial and it’s not uncommon for drivers to run wide onto the grass-crete.

Camp CornerThe final turn is fast, bumpy and has a false early apex that often caches out novice drivers. Use the pit lane entrance as a guide to braking and ensure the car is balanced as you turn in. There is a long run from here to Quarry so time lost here is amplified. Use all the road on the exit and the little kerb too. This can be nerve-wracking as the pit wall is very close and speeds are high. It’s a thrilling end to a fantastic lap.