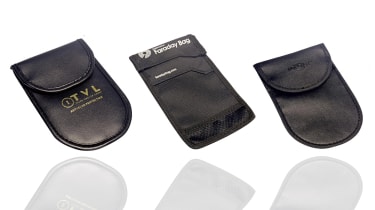 Keyless access to your car is, of course, incredibly easy and convenient - but car thieves are getting smart to this hi-tech innovation. Criminals make use of relay attack devices that ‘read’ the signal from the key from just outside your house. Once they have the code copied, they can get into your vehicle and drive off: it’s as simple as that.

The solution is to keep your key stored away in a Faraday bag. These bags are lined with layers of metallic material that blocks the key’s signal, and will prevent thieves gaining any access. The key will need to go straight inside the bag once you’ve locked your car. If you get a big enough bag, you can also store your phone and credit cards inside - a surefire way of preventing hacking or fraud.

If you are buying a Faraday bag, you’ll naturally want to make sure you pick up one that does a decent job. Luckily, we put eight to the test.

We also used an app that checked for phone, WiFi and Bluetooth signal-blocking. Furthermore, we rated each product based on its build quality, size and ease of use. These were all set against the cost per gram. You’ll find prices and links below to online retailers that sell each product.

Truth be told, this was a very close test as all the products performed perfectly - ultimately, it was a photo-finish. But when it came to value, build and practicality, the top spot for best Faraday bag is the Defender, with the key-only Disklabs KS1 and the Ecence in second and third place.

The Defender is impressive purely in terms of numbers: at 42g it’s the second heaviest bag on this list, but also the second largest and the cheapest by some way. Our test revealed that cell, WiFi and Bluetooth signals were all totally neutralised once the phone was inside the bag.

The Defender is also large enough to fit one of the new generation of big-battery mobiles (155 x 75), plus a flat Renault key - though a BMW equivalent was a bit of a squeeze. It’s a tad bulky if you’re only using it for a key, but for the solid build quality, phone option and super-low price tag, it’s still worth it. 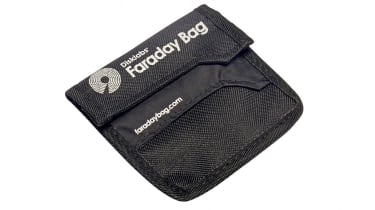 Of all the products on this list, only the Disklabs Key Shield bears a ‘Secured by Design’ police accreditation - a seal of approval that will offer much peace of mind. We admired its quality, with incredibly durable stitching across thick material. We’re confident this wallet will endure many years of use, and at 120 sq cm, it will fit keys of all sizes with no problem.

It also performed excellently, even when its flap was open. The price might be the highest of the products we tested, but it’s a wise investment for the quality and performance it offers. 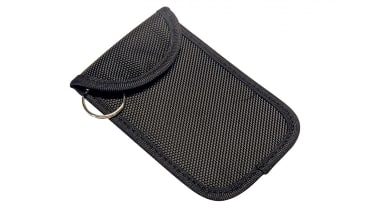 This Faraday bag from Ecence is near-identical to those from Halfords and B-G, which you’ll find further down the list. Its material is thick, and pretty similar to that of the Disklabs wallet, though we were less impressed by the join along the bottom edge: it looked like it might split after sustained use. The product has evidently been designed just for key storage, and being honest, our test keys were a tight fit. But it did a fantastic job of blocking the key’s signal, and its competitive pricing means it was ultimately a superior product to the two we first mentioned. 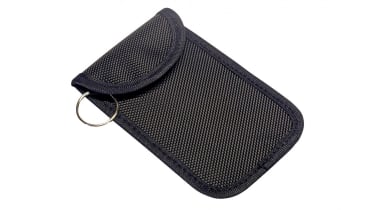 B-G actually offers two different Faraday bags, the second being jumbo-sized and, much like the Defender, suitable for mobiles (costing £12.99). This smaller version ranked more or less exactly the same as the Halfords and Ecence wallets, bearing the same pros and cons. On its back is a rudimentary chrome ring, that you can hang wherever your please, while there’s also a standard keyring attached to the top. But if you do clip on your car key, it’s incredibly hard to get inside the wallet. And presumably you’ll have your other keys on the same ring, which makes the whole thing a bit of a fiddle.

The Halfords scored low in terms of price - but with all other criteria, it fared just as well as the B-G and Ecence bags. We enjoyed the general feel of the wallet: it seemed sufficiently rugged to withstand regular use (although the ugly join was a shame). Its two-ply copper material successfully blocked all signal leakage, while its interior compartment could well come in handy for things like banknotes and receipts. And, unlike the other two, it seems intended for joint credit card use: it actually has room for a few alongside a key. 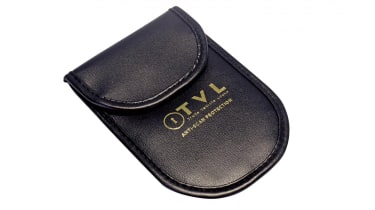 This Faraday bag from TVL is much the same as the TrackingUK one at the bottom of this list, and did a good job of blocking phone signals provided the flap was held shut. Another vinyl wallet, it seemed well made and able to survive repetitive opening and closings - but we weren’t so sure about it being constantly folded into a handbag or pocket. At 26g, it was more than 50 percent heavier than the TrackingUK bag. It blocked all key signals, but also came out as the second-most expensive product on test. 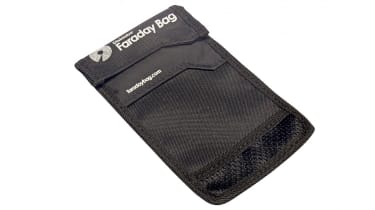 The super-sized wallet from Disklabs - intended for phones - mirrored its smaller counterpart in quality and style. It had the same police accreditation too. We noticed it was just a little bigger than the Defender, and could easily accommodate and block our mobiles. It also blocked all signals from  both keys and the phone with no issue, though fitting bulkier VW and BMW keys alongside the latter proved tough. On first glance, it seemed expensive, but a spot of maths proved the price per gram was below average. Ultimately, it couldn’t quite match the gold-medal Defender. 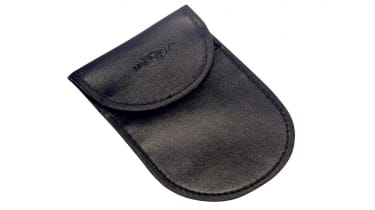 At a mere 16g, this bag is the lightest on the list. We found it to be unobtrusive, and easy to tuck away into a pocket when not being used. We weren’t entirely convinced by the vinyl construction, or the stitching, but it certainly performed admirably. It also worked perfectly on an iPhone, although that was with its flap being held shut, which is hardly practical the whole time. It was big enough to handle two separately - but that price, unfortunately, was a turn-off.