Of all the former bomber-base tracks, Snetterton seems to retain more of its old aerodrome feel than most... 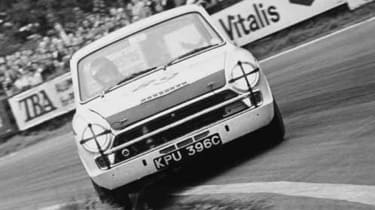 Maybe it’s the fuzzy pictures of the B-17s and their tragically eager young crews that cover the walls in the local pubs, or the access past the crumbling concrete of runway 24 and the old hangars that stand nearby. The width and height of the doors would give away their purpose even without the surroundings. No doubt about it, Snetterton has a feel of the past and even 60 years later the reasons for its origin can still make it a bleak and desolate place on a cold day.

The Motor Sport Vision people have done much to tidy the infrastructure of late, so even on a cold day it is a touch more welcoming than it was back in the 1960s. The racetrack is shorter than it was too – in 1974 the old Norwich straight which ran for ever alongside the main A11 had given way to the commercial needs of a Sunday market - but the track is now much safer. The Esses at the end of the back straight were soon tightened too, and the bridge which you hit if you got them wrong was moved. More recently Russell Bend has been slowed right down. This used to be one of those flat-out-if-you-dare places, but if you got that one wrong, you hit the pit wall. Many did. These days it’s a wide right-handed funnel that leads to a tight hairpin left and after three successive tweakings to kerbs and run off areas that have messed up all the lap record charts, it’s a half-sensible compromise.

In fact, Snetterton has relatively few places now where hitting something hard is an inevitable consequence of an off.  There are escape roads at the end of the faster parts – not because they were specially built but because that’s where the old runways went – and plenty of grassy fields everywhere else. Or almost everywhere. The catch-all at Riches corner which ends the pit straight is usually sown with cabbages. Annoying when you have to pick out all those muddy leaves from your radiator, but preferable to armco barrier.

Its location out along the A11 just a few miles from Norwich for some reason makes Snetterton less fashionable than the rest but if you look at the map it’s no further from London than Silverstone, and the M11/A11 is a fast and easy road – most of the time. Less fashionable means more available – you can usually get a session at Snetterton - and it is a good place to test. The straight is one of the longest in the country and the rest is a good variety of fast and slow corners which need to be learnt, including the challenge of The Bomb Hole and Coram Curve.

The following notes carry the same caveat as usual. The optimum will depend on your car, the type and how well it is working. A powerful rear-driven car needs room on the exit and in most cases will only push on if you try and cram it in too fast. Turn a little later and remember to accelerate early – and progressively – to make use of the car’s strength. Anything with downforce can take a lot more speed into the corner and – especially at Snetterton – will not be braking in the same places, or on the same bumps. Front-driven cars will also rely on a touch of extra on the way in, so in both cases, a slightly earlier turn will help you to take that essential speed towards the apex. Work up to it by starting late and turning a little earlier each lap until you reach an optimum.