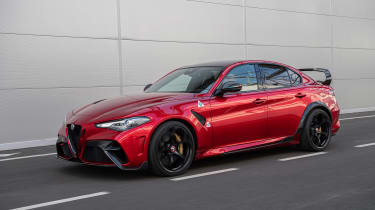 This is the Alfa Romeo Giulia GTA, an even more focussed, more powerful and more aggressive version of the Giulia Quadifoglio we already know and love. This special edition will be limited to 500 units, and comes in two forms: GTA and the even more stripped GTAm - the latter losing its rear seats, and replacing them with a half-roll cage, six-point harnesses and a rear moulding designed to hold your helmets.

The powertrain is familiar from the current Quadrifoglio, featuring the same basic 2.9-litre 90-degree twin-turbocharged V6 engine, paired to an eight-speed automatic transmission and rear-wheel drive. Power is up slightly over the standard car, with 532bhp compared to 503bhp in the standard model, that in part is raised by the fitment of a new Akrapovič titanium exhaust system that finishes via two large central exhaust pipes. 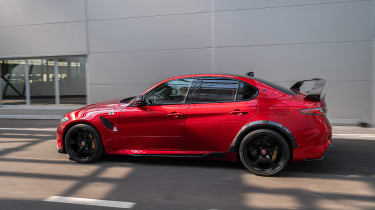 Alfa’s engineers have also paid attention to the dynamic package, widening the wheel tracks by 50mm, which are covered by bespoke front wings and rear wheel spats. The wheels, despite a familiar cloverleaf design, are now a centerlock design. New springs, shocks and bushes are also fitted, all designed specifically to make the GTA as agile and fun to drive as possible. 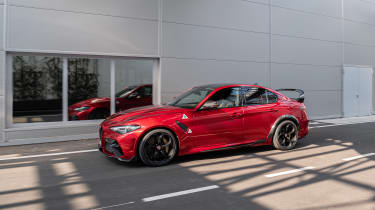 As mentioned above, the GTA and GTAm will be limited to a combined total of 500 units, with specific UK pricing and availability still yet to be confirmed by Alfa Romeo. As one of our absolute favourite contemporary sports saloons, the prospect of this even harder, faster derivative will come as a welcome addition to the line-up.