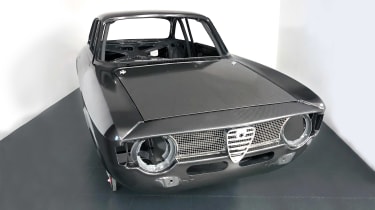 Low kerb weight should be first on the agenda for driver’s machines, but it’s a characteristic often neglected today, with increases in power being used to offset modern-day space, safety and equipment levels. Alfaholics’s GTA-R was already one of the very best examples of the benefits of pursuing lighter weight, and now a new variant has taken the model’s weight savings even further.

The GTA-R 300 Carbon is the Bristol-based brand’s latest addition to its Alfa 105-series conversion programme, applying the same formula found in the previous range-topper, the GTA-R 290, and adding a full carbonfibre body for reduced weight.

Under the bonnet, you won’t find a screaming 700bhp Judd V8 or a cumbersome LS, but rather an aluminium Alfa Romeo Twin Spark four-cylinder engine, with capacity increased to 2.3 litres from the standard 2. Combine its 240bhp, 200lb ft output with the car’s new sub-800kg kerb weight and you have yourself a 300bhp per ton power-to-weight ratio – hence the ‘300’ name.

The conversion saves 70kg on the already-lightweight steel-bodied cars, and 38kg on the GTA-R 290, which received plenty of carbonfibre components itself. To put that figure into context, the 300 Carbon weighs over 300kg less than the Alpine A110, and sends almost exactly the same power to the rear wheels. 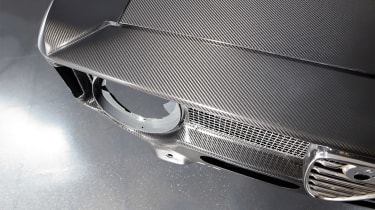 Alongside the new body, Alfaholics includes its Ultraleggera billet titanium suspension package as standard, to both aid in weight reduction and improve handling characteristics. Our drive in the GTA-R 270 proved that even the company’s standard bespoke suspension does its job very nicely, so (for now) we can only imagine what this upgraded set-up will do.

If you’re clued-up on the world of ultra-exclusive, low-numbers conversions from the likes of Singer and Alfaholics, you’ll probably have figured that this car won’t come cheap. The GTA-R 290 will set you back in the region of £240,000, so a price tag in excess of £300,000 wouldn’t be out of the question for the 300. Should you have the cash, though, we’d suggest it will probably be worth the splurge…