There are some great diesels today. This isn't one of them 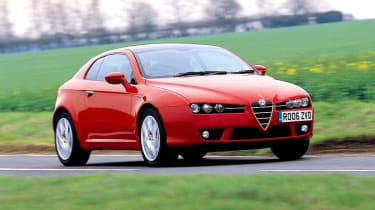 The Brera's looks have been making people drool in anticipation ever since it was first unveiled at the 2002 Geneva motor show. There were certainly some necks craned as the lipstick-red coupe slid into the car park at Evo Towers. The way writers, designers and subs all jostled their way out of the office to have a closer look confirmed the Brera's ability to pull a crowd too. Visually you lose nothing by having the diesel, since it gets exactly the same curves and the same number of tail-pipes as the top-of-the-range V6. However, after some pacing around, standing back, pressing of noses to glass and general oohing and hmmming, the office seemed divided; some were disappointed and declared that it looked like an overweight vamp, others were considering putting a couple of minor family members on eBay. Let's assume that, like me, you're one of the latter and, second cousin Marjorie duly despatched through Pay Pal, you decide to get behind the wheel. Once inside, the key slots into the aluminium dash just above the starter button and there's Alfa's trademark driver-focused layout with the centre console tilted towards you and various dials sunk deep into individual tunnels. Above you the beautiful smoked-glass roof throws a little extra light on proceedings. The only disappointment is the actual driving position; the seats don't go low enough or make any attempt to envelope you as a coupe's should and the slightly lofty view is vaguely reminiscent of a small 4x4. Clutch down, prod the starter button and say hello to the five-cylinder diesel. Ten years ago a diesel in a coupe would have been laughed out of Germany, let alone Italy, and it still seems a little strange to hear a high compression clatter. However, it does an appealing 41.5 miles to the gallon on the combined cycle, 200bhp is enough to out-do a Golf GTI and allied with a torque figure of 295lb ft the JTD should provide oodles of the much-lauded 'real-world' diesel performance. Unfortunately it doesn't. The five-cylinder revs cleanly to its 4500rpm red line, but never does it feel like it's making its claimed power and torque figures. It also lacks any sort of character - it's merely a 2.4-litre means of propulsion - and if you catch the engine off-boost or below 2000rpm you're presented with turbo-lag on a monumental scale. Exiting a roundabout in a perfectly reasonable gear but with no bar spooled-up, I was genuinely concerned that the person behind might run into the (usefully spacious) boot as I appeared to be going absolutely nowhere despite having the accelerator mashed into the carpet. I think it's safe to say that unless you cover an intergalactic mileage each year and desperately want to save money on fuel, best avoid the diesel engine in the Brera. Engine apart, the Brera is best at about six tenths on a smooth, sweeping road. The steering is very quick, which makes the car feel alert and the front end keen to tack into bends. The Brera's weight makes it sit well and there's grip aplenty from the 225/50 R17s. It even feels nicely throttle adjustable. Push further and faster, however, and the Brera loses the plot slightly. The quick rack makes it a difficult car to flow with and you don't really get any sense of how much contact the Bridgestones are finding with the road. Throw in a mid-corner bump or two and the car shudders under load in a way no modern car really should. The Brera also starts to float in a disconnected way at speed - understeer appearing through the windscreen rather than the seat or steering wheel. The forthcoming Q4 V6 might have more chance of challenging the 350Z, but for now the Brera will undoubtedly sell on looks alone.