It's another Alfa rebirth, only this time it may actually be for real 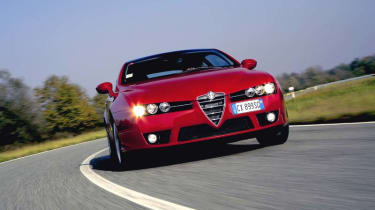 Is this, or is this not, a serious performance car? God knows it's time Alfa Romeo had something able to hold its head high in the performance pantheon, no excuses, no half-measures. Channelling 250bhp through the front wheels has been all very well, but it isn't ideal when we're talking about truly credible driving machines.

Happily, lurking in the R&D department ready for the company's new 'premium' platform has been a fine four-wheel-drive system. And now the cars are emerging that make use of the new 'Q4' transmission: first the 159 saloon, and now the Alfa the world has wanted since it appeared as an unofficial concept on Ital Design's 2002 Geneva Show stand. Meet the Brera.

As conceived, the Brera was a dramatic gullwing coupe named after a posh suburb of Milan, Alfa's home city. Ital Design boss Giorgetto Giugiaro hadn't intended it for production, but Alfa Romeo was looking to replace the GTV and Spider, adopted the Brera idea, and gave it to Pininfarina to engineer into a production reality.

Pininfarina now makes the Brera, and will make the Brera Spider by the summer, in its Turin factory. The gullwing doors have gone, replaced by regular frameless items, but otherwise the concept - glass roof with electric sunblind included - has stayed as intact as Audi's TT did in the reality transformation.

You've seen the Brera's face before. The late-life facelift for the 156 wore such a front, and the just-launched 159 is the same, bumper and valance apart, as the Brera up to and including the dashboard. The platform is the same, too, apart from a wheelbase shortened from 2700mm to 2525mm, and three of the engines are taken from the 159 range. They are a new 2.2-litre, 185bhp petrol with variable 'Twin Phaser' inlet and exhaust cams plus direct injection, a 3.2-litre, 260bhp V6 with the same technology (both are based on aluminium, GM-sourced blocks), and the existing five-cylinder, 2.4-litre turbodiesel currently giving 200bhp. All drive through six-speed transmissions.

Psycho-acoustics is a big part of modern engine design. If a new car sounds enticing, it's not because it just happened that way through some petrol-fuelled cultural osmosis, like it used to. It will have been engineered, analysed, clinicked, deconstructed, reconstructed. It means that, despite rampant regulations, Alfa's new V6 sounds as good as an Alfa V6 should; deep and burbly at low revs, forte con brio at high revs.

But, unlike its ancestors, this engine has meaningful low-end pull even if the peak torque of 237lb ft doesn't arrive until 4500rpm. And that's just as well, because this Brera is one heavy car. It weighs 1630kg, so its outright pace isn't ballistic, merely usefully quick. Standstill to 62mph takes 6.8sec, thrust finally abates at 149mph.

The Q4 system clearly adds weight, but it's set up to make the Brera feel almost rear-wheel-drive-ish much of the time. The nominal front/rear torque split is 43/57, but it can alter between 72/28 and 22/78 as required. That's a big spread, controlled by a Torsen-C centre diff and the usual bevy of speed, steering and yaw sensors. There's a traction-control system which you can turn off, and a stability system (called VDC) which you can't, although turning off the traction resets the VDC to allow more drift.

OK, crunch time. We want this not to feel as turbulent as the 156 GTA, not as nose-heavy as the 147 GTA. Maybe a taste of Impreza WRX would be good. On the first right-left flick after the straight it points keenly, flicks directions tidily, gets its power down. It's similarly grippy and positive on the next fast left-hander.

Now a tight left, followed by more tight left/right snakes. In one 180degree right-hander, nose-heavy physics does win through; I have to slow down to rein in the understeer because late braking and kicking the tail out doesn't give enough sustained weight transfer across the back to let me keep the power on. Yes, you can make the Brera drift on a shorter bend, and you do get a frisson of rear-driveness as you power onto the next straight, but it's a transient state. Alfa's test drivers say you can make it power sideways if you really abuse it, but it's not natural. Traction and torque-steer, however, are not an issue. And there hasn't been a really powerful Alfa you can say that about for a very long time.

This Brera will cost about £30,000 when it arrives in early April. The JTD turbodiesel comes later, but the likely biggest seller, the 2.2 JTS, will appear in UK showrooms along with the V6. It's front-wheel drive, of course, and weighs a useful 160kg (or two people) less than the V6. The residual mass is still quite a lot for 185bhp, though, and there are rival coupes around the 2.2's £25K selling price with considerably more power (the Nissan 350Z, for example).

The upside is that the new Alfa platform, with its high-upper-wishbone front suspension and multiple-link rear, has no trouble at all in getting that 185bhp to the front wheels. And, unlike the 156-derived range of earlier Alfas, including the GT which continues in the range for the time being, it manages to match taut handling and a solid feel with a compliant, controlled ride free of shudders and bottoming-out. A very stiff bodyshell helps here.

Out on the open road in the 2.2, heading up some Alpine foothills north of Balocco, I'm going more gently than in the 3.2, which frustratingly wasn't allowed out of the test track's gates. Now I can discover that the steering is both quicker and meatier than a 159's, thanks to the shorter wheelbase and driver-friendlier valving, but there's a disappointing rubberiness around the straight-ahead. It filters out too much subtle road feel, but at least the steering doesn't suffer from the friction found in too many modern systems. And the faster I go, and the twistier the road, the better the Brera gets as other inputs fill in the gaps.

It points keenly, like the V6, and as you accelerate through a fast corner you can feel the outside rear wheel loading. That's usually a sign of a throttle-adjustable balance, and so it proves. This Brera is fluid, agile and accurate, attributes that make up for its lack of ultimate pace.

The engine isn't especially strong at low revs, either, forcing much use of the six-speed shifter, and an inconsistent throttle response makes for jerky progress at first. It does make a convincing Alfa twin-cam, four-pot sound, though, so you can forgive it a lot.

Many people will buy a Brera for its looks and kudos, anyway, and they won't be disappointed. Its low, six-light nose looks faintly menacing, its tail is dominated by eight light units set in a chrome-red sea beneath two horizontal lenses, and the vee-shape of the rear window's base points directly to the Alfa badge. It forms the tailgate handle; pull it to reveal a decent boot space, made bigger by folding rear seats which are otherwise big enough for pre-teens at best.

Front occupants, meanwhile, luxuriate in their leather chairs surrounded by padded surfaces and a slab of real aluminium on the hefty, driver-angled (and passenger-excluding) centre console. You sit lower than in a 159, and the driving position should suit almost anyone. For many, the Brera 2.2 will be coupe enough.

You should try a V6, though. It's good when faith is restored. 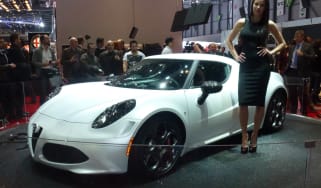 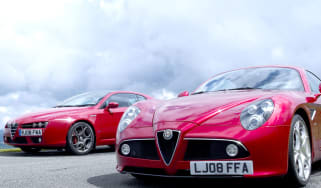 Alfa’s back! We drive one of the very first 8C Competiziones to arrive in the UK, and find out how Prodrive has transformed the underachieving Brera
Visit/alfa-romeo/brera/9033/alfa-romeo-brera-s 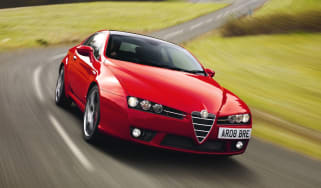 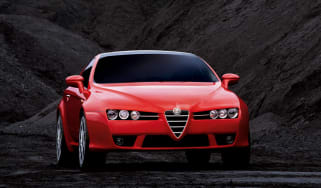 Alfa's Brera could finally be as good to drive as it is to look at – with a little help from Prodrive
Visit/carreviews/evocarreviews/200495/alfa_brera_v6_spider.html 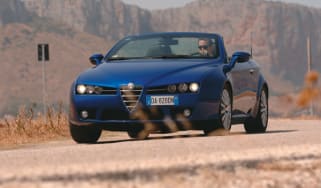 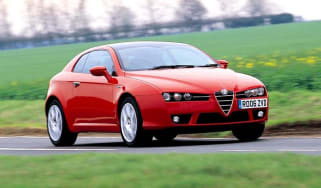 There are some great diesels today. This isn't one of them
Visit/news/evonews/54597/alfa_brera_in_the_metal.html 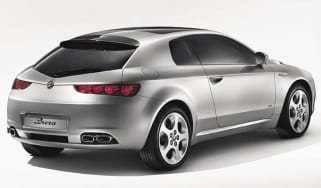 Alfa Brera In The Metal+

This is the production version of the new Alfa Romeo Brera coupe, launched at the Geneva Motor Show. Although it's been three years since we first saw…
Skip to HeaderSkip to Content