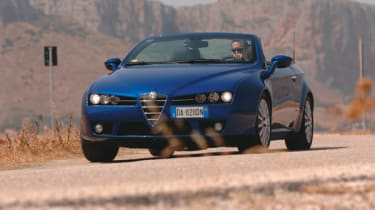 That Alfa Romeos look good is taken for granted these days. Since the stylish 156 saloon kick-started the brand’s resurgence in the late ’90s, the very idea of an ugly Alfa Romeo has become something of an oxymoron. But while the brand’s styling credentials aren’t really in doubt, it still has plenty to prove when it comes to turning out proper sports cars. However, bullish Alfa bosses have named the BMW Z4 and – whisper this bit – the Porsche Boxster as possible targets for their latest drop-top. So it had better be good.

Using the pretty Brera coupe as a starting point, the Spider certainly looks the part. It’s even better in the metal than the pictures suggest, although it’s not flawless – the roll hoops look contrived and the car as a whole looks a little awkward with its hood in place. Thankfully, the fabric carbuncle disappears (in a leisurely 27 seconds) and transforms the car’s appearance in the process.

There’s a price to pay for the gymnastics, though, in the form of the Spider’s increased weight. An extra 60kg may not sound like much, but it’s enough to blunt performance. According to Alfa, the 0-62mph sprint takes 7.0sec (0.2sec longer than its coupe sibling), though it rarely feels as fast as that figure suggests.

Admittedly, the V6 engine’s deep, burbly soundtrack is an aural delight, but you’d better get used to it because it needs to be worked hard to make rapid progress. On our busy Sicilian test route, dispatching dawdling locals required a downchange more often than should be necessary in a V6-engined £30K sports car.

Straight-line performance isn’t all that has suffered at the hands of the can-opener either, because there’s an unwelcome amount of flex in the chassis. Uneven tarmac will have the windscreen shaking, while big ruts and potholes send shockwaves through the entire cabin. And the ride won’t get any better if you’re tempted by the gorgeous optional 18in multi-spoke or telephone-dial alloys in place of the 17in rims fitted to our car. Which is a shame, because traction from the Q4 all-wheel-drive system is impressive. In normal conditions 57 per cent of the torque is sent to the back wheels, but the Torsen diff can direct as much as 78 per cent rearward when the situation demands it.

The firm suspension limits body-roll, and grip levels are high, but carry too much speed into a corner and the Spider will understeer. If you’re brutal with the throttle in tighter bends it is possible to unsettle the rears, but it’s no match for a well-sorted rear-wheel-drive chassis like, say, that of the 350Z Convertible.

Direct steering helps to keep everything pointing in the right direction, but in reality the Spider’s handling lacks the sharpness of its tin-top sibling. It’s better suited to loping along than hammering up and down the short-throw six-speed ’box. Pity, then, that it lacks the comfort to be a true tourer.Inside, the well-built cabin borrows heavily from both the 159 and the Brera, with all of the major controls and dials angled purposefully towards the driver. Classy aluminium trim adds a welcome touch of Latin style, but there’s precious little to set the most expensive car in the Alfa range apart from lesser models.

Although a strict two-seater, you do get a handy storage shelf behind the front seats for weekend bags or golf clubs, which is probably just as well, as drawing admiring glances in the club car park is what the Spider is best suited for. Its distinctive looks, smart interior and V6 soundtrack will be enough for some, just don’t expect the driving experience to set your hair on fire.