Alfa Brera In The Metal+

This is the production version of the new Alfa Romeo Brera coupe, launched at the Geneva Motor Show. Although it's been three years since we first saw the Giugiaro-designed concept (red car in image), its stunning looks have remained intact. 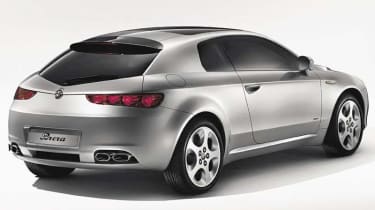 The 2+2 coupe is smaller than the GT, but significantly bigger and more practical than the aged GTV, which it replaces. At 1.83m wide, 4.41m long and 1.37m high, it is about the same size as a new Audi A3. It picks up on many of the styling cues seen in other recent Alfas including the family grille and the distinctive rear window of the 147. Beneath the very narrow rear lights and protruding from the rear bumper are four exhaust pipes in the style more usually associated with BMW M cars. The roof, meanwhile, is a fixed-glass affair to help the impression of interior space and give the Brera a more streamlined appearance from the outside. Although for the moment the standard 3.2 V6, putting out 260bhp (up 20bhp from the GT), is the most enticing of the engine options (the alternatives being a 2.4 JTD with 200bhp or a 2.2 JTS with 185bhp), but reliable source's say that when the GTA version of the Brera arrives it will have 405bhp. Paolo Massai, vice president of Alfa Romeo's Engineering Development Centre, and his team have completely re-engineered the V6 for the GTA, starting with the addition of twin-turbos. Perhaps more intriguingly however, the cylinder heads feature Fiat group's new UNIAIR induction system, which dispenses with the butterfly throttle valve. As a result the torque figure is said to be massive, 13 per cent higher than it would be without UNIAIR. The GTA will put its power down through Alfa's Q4 four-wheel-drive system, as will the standard V6 (lesser models are front-drive), allied to a traction and stability system called VDC. Although the standard car's engines can all be allied to a six-speed manual gearbox, as well as an automatic, the GTA is likely to be available only with a Selespeed gearbox. The long-held Alfa Romeo promise of a driving experience as great as the cars' looks is reiterated with the Brera, and this time its handling pledge rests on quadrilateral front suspension, with a multilink set up at the rear. The first examples should be on sale in Europe by the end of the year, with right-hand-drive models due to arrive in the UK in the spring of 2006.