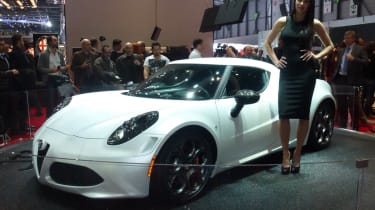 Alfa Romeo has officially launched the production version 4C at the Geneva motor show, however has only released final details of the exclusive ‘Launch Edition’ model that will be made available to early buyers.

Power and torque figures of the Launch edition have been confirmed at 237bhp and 258lb ft. This will come from a tuned version of the company’s 1750cc turbocharged four-cylinder engine.

Thanks to extensive use of carbon fibre throughout, weight has been kept down to around 895kg, with the carbon tub weighing just 65kg. Alfa claims a 4.5second 0-62mph time and a top speed in excess of 155mph.

The Launch Edition gets a number of extras, including carbon fibre details throughout the car, including the headlights, rear spoiler adnd door mirrors, as well as exclusive Bianco Carrera paint.

The Launch Edition has been confirmed for the UK, with prices starting at £52,000 – but when the standard car is launched, expect prices to start lower than £50,000.