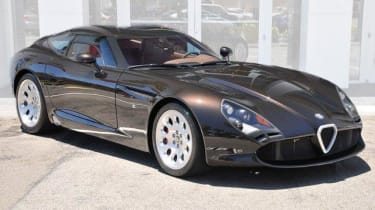 One of nine Alfa Romeo TZ3 Stradale models ever produced has come up for sale at a Ferrari dealer in Newport Beach, California.

Zagato first produced the TZ3 in 2010, as a nod to Alfa Romeo's centenary celebrations. The original car was a one-off 'Corsa' model designed and built for German collector Martin Kapp. The name 'TZ3' was chosen as a follow-up to Zagato's previous track-focused Alfa sports cars, the TZ1 of 1963 and 1965's fibreglass-made TZ2.

The TZ3 had originally been conceptualised in 2003 and was to be based on the Alfa Romeo 8C Competizione. Indeed, the one-off Corsa concept houses a similar powertrain - a 4.2-litre Ferrari-derived V8, as used by Maserati in its GranSport Trofeo series. In the TZ3 Corsa, this produces 435bhp, while a 0-60 time of 3.5 seconds is as much a symptom of the 850kg kerb weight as the V8 under the bonnet.

Cancellation of the 8C programme meant Kapp's Corsa would remain a one-off, until Zagato produced a limited run of Stradale models based on the platform of Dodge's hottest Viper ACR.

With 640bhp from the Viper's 8.4-litre V10, the Stradale produces even more power than the Corsa, though its new American underpinnings lead to an increase in weight tweaks to the TZ3's lines.

The Viper's six-speed manual transmission remains untouched, a departure from the Corsa's race-derived six-speed sequential gearbox. Unlike the Viper - and unlike the hand-beaten aluminium of the original Corsa concept - the Stradale Zagato's body is fashioned from carbonfibre. Key Zagato attributes, like the double-bubble roof and kamm-tail rear end, finish off the Stradale's transformation.

The car on sale with Ferrari of Newport Beach is the seventh TZ3 produced, and features a combination of metallic brown paintwork with a chestnut leather-swathed interior. The car has covered just 317 miles in its four-year existence - a sign that cars such as this are often collected, rather than driven.

Given the TZ3's rarity, it's not hard to see someone stumping up the hefty asking price, which could buy a small handful of Ferraris. For that, they'll have a car far more exclusive than the Prancing Horse products alongside it on the forecourt, though one that's also less likely to be seen cruising Newport Beach itself...