Alfa Romeo cleans up and speeds up Giulietta range 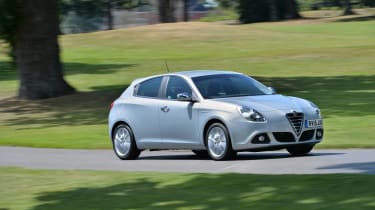 With so much hype over the new Alfa Romeo Giulia it’s easy to forget that Alfa Romeo still offers a brace of humbler hatchbacks in its range.

While the smaller Mito competes head-on with Fiestas, Polos and similar, the Giulietta is Alfa’s answer to the Focus and Golf. Alfa has now tweaked its engine range to help the Giulietta compete in an increasingly competitive segment.

Three factors have improved as a result: Emissions, economy and in some models, performance. This is most notable in the volume-selling 1.6 JTDM-2 turbodiesel, where CO2 drops from 104g/km to 99g/km, it sneaks under the Euro 6 emissions bracket, and returns 74.3mpg on the combined cycle.

The benefit of this is a BIK reduction to 17 per cent for company users, and yearly VED of £0 for all customers.

The remaining petrol engines are also Euro 6 compliant and each sheds one percent from its previous BIK figure. The 1.4 MultiAir Turbo Petrol, available with both 150hp and 170hp outputs, also drops into a lower emissions band – now D, for a £110 yearly bill. The latter is respectably brisk, reaching 62mph in 7.6sec and going on to 135mph.

Topping the range is the 1.7 Quadrifoglio Verde. Sharing its engine with the Alfa 4C, the QV hits 62mph in 6.6sec, reaches 152mph, and returns an official 41.5mpg.

This engine too is Euro 6 compliant – though it’s safe to say Alfa’s changes won’t see the QV jump onto our list of favourite hot hatchbacks.