The Cloverleaf badge is back. Can it turn the Alfa Romeo Mito into a genuine hot hatch? 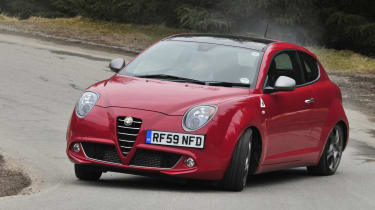 The return of the Cloverleaf badge, this time on the flanks of the Alfa Romeo Mito. The flagship of the Mito range, it costs £17,895.

For once, it’s not the MultiAir engine, but the adaptive suspension – a rarity in a car of this class. Controlled through the DNA switch, it takes readings from sensors on the body, suspension, steering and throttle to decide how much damping force is needed.

It’s the best Mito we’ve driven. Damned by faint praise, then? Well, it’s not a hardcore charger in the mould of the Clio 200, but instead trades outright driver appeal for a good measure of refinement and ride comfort. It strikes a good balance in this regard – even on Highland roads ripped apart by winter frosts, the ride never became crashy, the dampers never clobbered their bump stops, something that simply isn’t true of the standard Mito.

Even flicking the DNA switch into Dynamic, which tightens up the suspension and alters the steering, throttle and ESP, doesn’t upset progress – it’s firm, but well damped and tightly controlled. This is just as well, because N (Normal) is hopeless; the ride’s plush, but the steering is horribly over-assisted and the throttle responds far too lazily. We never used the A (All-weather) mode.

In its sportiest mode the Mito is zesty – especially the 170bhp MultiAir engine, which is a really engaging unit, tuneful, hyper-responsive and poky enough to keep you entertained. Its mated to a brand new slick, fast-shifting six-speed manual. It’s a cracking drivetrain, able to stand comparison with the Cooper S.

If only the same were true of the handling. It’s not that the Cloverleaf doesn’t grip well or have good body control, it’s that you don’t feel fully included in the experience. The steering is too inert and the layers of electric assistance (especially the ESP and Q2 diff) rob the car of much natural feel. It's not nearly as bad as lesser Mito's, but we'd hoped for a bit more from the Cloverleaf.

Dynamically it’s not as engaging as the Mini Cooper S or Renaultsport Clio 200, and comes across as a more mature proposition. In concept and execution its closest rival is the new Citroen DS3 DSport, which at £15,900 is two grand cheaper.

As I alluded to above, the Mito doesn’t fit in the conventional supermini class – although based on the Fiat Punto it feels bigger and you sit higher. There are no bodywork changes for the Cloverleaf either, just the new alloys and the stuck-on plastic flank emblems – which are a bit of a let down to be honest.