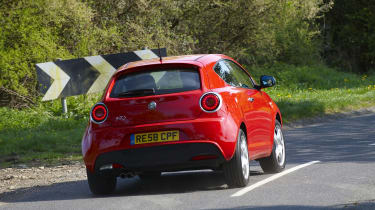 We didn’t like the Mito when we drove it back in issue 128. With slack suspension and curious steering, it felt underdeveloped. It just didn’t seem like a genuine Alfa, let alone an Italian Mini-chaser.

Turns out there was a reason for that. The cars on the launch were on the wrong factory settings, built just before a modified steering and suspension set-up was introduced to the production line. Bought an early Mito? Don’t panic – all British cars (apart from those early press cars) are on the right settings, we’re told.

So does the Mito now deserve more than three stars? The differences are certainly detectable. The front suspension is now much less baggy and the steering weightier, so you have a far better idea of what the nose is up to and can enjoy the taut turn-in. However, the steering still has a few quirks, chiefly an odd resistance that manifests itself as very strong self-centring.

And we have a niggling feeling only the front suspension has been updated – there’s a discrepancy between the behaviour of the front and rear axles, the rear as jittery as the front is positive. So yes, the Mito is better now, but these minor tweaks fall short of a full transformation and this hatch is still too digital in its responses and too plain in its approach to be genuinely exciting.