Is latest Alpina B3 a prologue to the BMW M3 saloon? 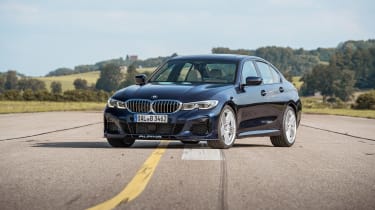 Alpina has revealed the saloon version of its new B3, after showing off the Touring earlier this year at the Frankfurt motor show. Mechanically identical to the Touring, the main difference, aside from the obvious body style change, is an even more impressive set of performance figures thanks to a slightly lower weight and centre of gravity.

As such, the new Alpina B3 saloon is able to hit 62mph in 3.8sec, and 124mph in 13.4sec, 0.1sec and 0.5sec faster than the Touring respectively. Its top speed has also increased to 187mph, 1mph faster than the Touring. Generating all of this performance is a 3-litre twin-turbocharged inline-six petrol engine producing 455bhp between 5000 and 7000rpm, with a chunky 516lb ft of torque filling out the lower part of the rev range between 3000 and 4250rpm.

Alpina says the B3’s power comes from an ‘S58’-designation engine, which is in fact the very unit that will power next year’s M3, and already powers the X3 and X4 Ms. Whereas classically the Alpina derivative has worked from the most powerful non-M division powertrain of that model for its cars, this appears to no longer apply with the new B3, making it closer than ever to BMW’s own incoming 3-series performance flagship.

Also like the M3, power will be sent via an eight-speed ZF automatic transmission to a rear-biased xDrive all-wheel-drive system. The Alpina B3 does without any trick RWD mode however, and on its standard-width body does without the substantive chassis upgrades the M3 will likely feature. 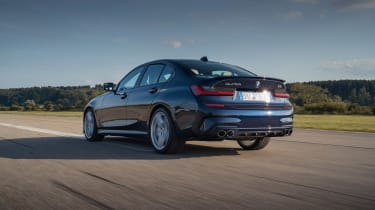 In another departure for Alpina, the new B3 also now uses an M Sport-bodied 3-series as its base, with Alpina’s front skirt and rear valance having now been applied to more open and aggressive bumpers. This has likely been done for the sake of cooling, as standard 3-series bumpers don’t actually feature the outer intakes they once did. Quad rear pipes, a lip spoiler and optional decal packs round out the rear. This subtle aesthetic upgrade will also provide one more substantial difference to the incoming M3, with that car likely to share the same nose as the M4 and its distinctive (ie. large) new kidney grille.A retro design five-spoke 19-inch wheel completes the package, but a traditional 20-inch multi-spoke design is also available. Alpina’s usual interior updates also apply, with bespoke stitching, gearshift paddles and the now digitally blue hue on the standard digital dial pack. UK prices and specifications have yet to be revealed, but first models won’t be reaching customers until mid-next year, just in time for the new M3.