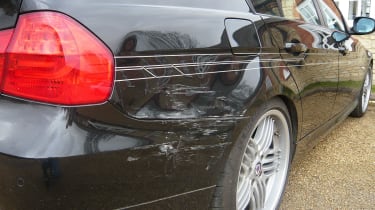 I’d been looking forward to writing this month’s update on our new Alpina. There was so much to say. I was going to write about how the engine is loosening up nicely, revving sweetly to 5500rpm and pulling like a train yet still returning 40mpg. Then I was going to waffle on about how the handling limits are more accessible than an M3’s, making it more exploitable in the real world, and how it’s such a good all-rounder that I’ve persuaded a mate to buy one instead of a 3.0 TDi Audi A4. Nothing, it seemed, could dent my enthusiasm for the D3.

Shame the same couldn’t be said about the Alpina’s bodywork, because a Toyota Rav4 has just reversed into it. Now, I know the driver didn’t mean to do it, and at least he admitted liability, but I could have throttled him. I guess I wouldn’t care quite so much if the D3 and I hadn’t bonded so well.