No complaints with the Alpina D3. It’s as happy crossing continents as sliding around roundabouts on a wet day in Milton Keynes 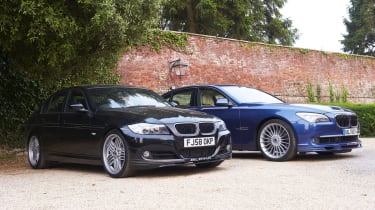 I’m going to be late with the D3’s first service. Right now it’s just three miles short of the big 10K and, instead of sitting in the bays of UK Alpina importer Sytner in Nottingham, it’s 100 miles away outside our office. But I do have an excuse. Having just driven the huge B7 Bi-Turbo over from the Alpina factory in Buchloe to Goodwood for the Festival of Speed, I couldn’t resist the opportunity to get the two cars together for an impromptu if rather mismatched twin test.

While the competitively priced, base-spec D3 has added a new string to Alpina’s bow, the B7 harks back to the pre-credit-crunch era of BMW’s favoured tuner. The B7 is all about big power (507bhp), enormous wheels (21 inches), optimised dynamics and lavishly bespoke interiors. What I wanted to know was whether the D3 felt like a chip from the same block. I’d completed exactly the same journey when I collected our long-termer back in January, so this was a chance to see whether it was a true member of the Alpina clan or just a diluted form of the traditional core values.

Not that I’ve ever had issues with the D3. It’s a car for all occasions, as happy crossing continents as sliding around roundabouts on a wet day in Milton Keynes. But would it still feel special after three days in the uber-limo? I was pretty sure it couldn’t match the effortless 190mph we saw on the autobahn in the B7 (I only got to 120mph in the D3 as I was running it in) or paint 100m black lines on the Earl of March’s driveway. They both drew a crowd at Goodwood, though. I often returned to the D3 to find someone peering through the windows or checking out the wheels. It’s the type of car that people want to chat about at petrol stations, where the first questions are about performance rather than mpg.

Being born from a 7-series, the limo is festooned with gadgets, from adjustable suspension and a head-up display to night vision and adaptive cruise, while the huge chairs are trimmed in opulent leather from the world’s softest cows. But despite being far less extravagant, the D3 still has enough sparkle sprinkled throughout to raise it above a regular BMW. Okay, it lacks the grunt to dismiss lesser road users quite so disdainfully, but it still has enough road presence for them to scurry out of the fast lane when its logo’d front splitter looms in their rear-view mirror.

So was I disappointed to leave the B7 behind at Goodwood and crawl home up the A286 in the four-cylinder diesel? Not at all. In fact in the rare moments when the traffic cleared, the more nimble D3 offered flashes of fun that the behemoth would have missed out on. It’s most definitely worthy of the Alpina badge. That said, if I was offered a B7 when my D3 loan comes to an end, I’d rip Sytner’s arm off.