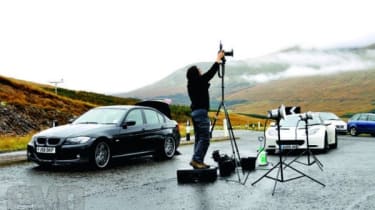 Before Harry got his calculator out, staff photographer Chris Rutter was going to use the Cayenne Turbo to ferry his camera kit up to Skye for eCoty, but it transpired that it’d be £350 cheaper to use my Alpina. Chris averaged 44mpg over the week and completed the first part of the journey, from Cambridge to Glasgow, on half a tank. Not bad when you consider the weight of his tripods, clamps, lights, cameras, battery packs and ladders.

That weight did cause some bottoming-out on bumpier roads, and uphill acceleration was less effective, but as a long-distance companion Chris had no complaints, although he did say he would have preferred the estate D3, as the saloon’s deep but narrow boot opening caused him a little back pain.

Overall, though, I reckon that if we’d included the D3 in the test it wouldn’t have disgraced itself, especially if we’d left Chris’s gear on the side of the road.