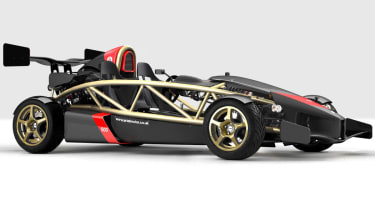 Thought Ariel’s V8-powered Atom had fell by the wayside? We wouldn’t blame you. It was announced around the same time as the Caterham Levante, a car that we’ve driven a couple of times now, yet word of an eight-cylinder from Ariel was scant.

The good news, though, is that it’s edging close to production-ready. Here’s the first picture of its engine, a 500bhp 3-litre V8. It’s normally aspirated and boasts a compact 75-degree V bank angle with four valves per cylinder and a unique cam drive arrangement to further reduce engine size and weight.

It tips the scales at less than 90kg, contributing to the car’s slender overall kerb weight of around half a ton, ensuring a power to weight ratio of around 1000bhp/ton. That’s twice a Bugatti Veyron and about on par with the aforementioned Levante and the Caparo T1.

Touted acceleration figures are nothing short of staggering, with 0-60mph taking sub-2.5sec and 100mph arriving in less than six seconds.

The six-speed Sadev sequential gearbox no doubt contributes to those times. It comes with a manual shifter, but paddles are being investigated as a future option. The suspension, brakes and aerodynamic package are all exclusive to the Atom 500.

Just 25 are being made, with nearly half of that quota sold. There’s no word on price yet, although it’s unlikely to come cheap. You’ll take chunks out of the rest of your trackday chums, though…

Cupra’s launched not just one, but a whole range of hot Leons to rival the rapidly expanding hot hatch class in 2020
Visit/features/22907/hyundai-i30-fastback-n-versus-the-col-de-turini