We review the racing car that will compete in the 2013 Ariel Atom Cup. More hardcore than the regular Atom? 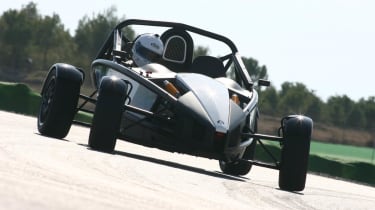 What is it? The new racing car that will compete in the Ariel Atom Cup. You’ll need £42,000 (including VAT) to buy an Atom Cup, which is based on an Atom 245 and features the same 2-litre four-cylinder Honda K20Z engine with 245bhp and 165lb ft.  Then you can choose between race packages, from the basic Bronze package at £21,834 right up to a full arrive-and-drive Gold package at £41,582. No, this isn’t grassroots stuff, but it is relatively competitive in racing circles. And at least you won’t be constantly replacing crumpled body panels… Technical highlights? There’s been lots of detailed development to transform the road-going Atom 3.5 into a race car. The chassis tubing is identical but there’s now an MSA-approved roll-cage, a motorsport-spec fuel tank, a fire extinguisher, rain lights and a cut-off switch. The suspension features longer wishbones to allow greater camber adjustment and new Ohlins race dampers are fitted.  Despite running the same lightly treaded Yokohama A048 tyres as the road cars (there is a full race wet, too), Ariel claims that the Cup is sharper and more exciting. The near-unburstable drivetrain is sealed in seven places to prevent cheating, as are the dampers and ECU. Kerb weight is unchanged at 550kg. What’s it like to drive?  Before you roll away you notice just how much camber the front wheels are running and wonder just how different this little car will feel. The answer hits you before you’ve rolled out of the pit garage: ‘very’. There’s so much more accuracy to the way the car responds to steering inputs thanks to the much stiffer and track-optimised suspension. Suddenly the always-playful Atom feels very serious. Within a lap you’re revelling in the new-found turn-in response, the greater resistance to understeer and just how early the rear tyres will take all the torque you can throw at them. Ariel has really delivered on its promise of higher limits and a more neutral balance. The car feels progressive as it transitions into oversteer and allows you to attack any corner in a variety of ways. The superb drivetrain similarly gives you options – use the abundant torque, or wring it out for every rev. The only weak links are a brake pedal that doesn’t communicate much about when the wheels are about to lock up and a lack of visibility in the mirrors. Which could be interesting at the first corner… How does it compare? Other race series you might be considering include the Radical SR1 Cup, designed for novices, starting at £45,000 (including a 185bhp car to keep) and starring record Olympian Chris Hoy, while a season in the Caterham Academy starts from £20,495, but you’ll be driving a basic 125bhp Seven. Anything else I need to know? The Atom Cup could be a compelling series. The car is a real challenge to master even on an empty track, so 20 of them swarming around together should be something very special.