Aston is back with a high-tech prototype racer, but will it be enough to match the diesel-powered front runners? 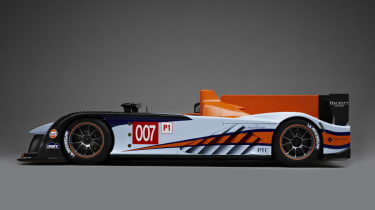 This Gulf-liveried AMR-One is Aston's new Le Mans racer, designed and built from the ground up by engineers at Aston Martin Racing. Opting for an open-cockpit carbon fibre monocoque, the AMR-One also features 2011's most popular aerodynamic appendage, the 'blade-fin'. Just six will be made, with a pair of factory works cars competing at selected events throughout the year.

In a bid to take advantage of the efficiency-led regulations, brought in for the 2011 LMS season (which is also designed to close the huge performance gap between petrol and diesel entries), Aston Martin Racing has created a brand new 2-litre straight-six engine, producing approximately 540bhp - thanks to direct injection and a huge turbocharger! Power is transmitted to the wheels through an Xtrac six-speed, semi-automatic racing gearbox; with braking handled by all-round Brembo six pot calipers and carbon-ceramic discs.

Piloting the 007 car throughout 2011 will be Darren Turner (GB), Stefan Mücke (D) and a third driver still to be announced. Adrian Fernandez (MX), Andy Meyrick (GB) and Harold Primat (CH) will be teaming up to drive the 009 car, which is scheduled to make appearances at a limited number of races throughout the season.

The team is hoping that 007 will make its racing debut at the Twelve Hours of Sebring on March 16-19; going on to contend the full seven-round Intercontinental Le Mans Cup in the US, Belgium, Italy, France, the UK and China.

Aston Martin Racing Chairman and founder of Prodrive, David Richards said: “George and the team have been extremely busy over the winter months and they have been working day and night to produce what is not only a stunningly beautiful race car but one which will use the new ACO regulations to best effect. Just like the road cars, the AMR-One has been elegantly engineered where simplicity runs throughout to produce what we expect to be a competitive and reliable endurance racer.”