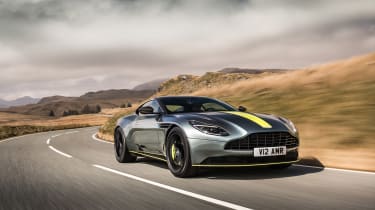 Aston Martin could be forgiven for leaving its DB11 on the back-burner after the launch of the new Vantage, but instead it has unveiled a new flagship variant called the DB11 AMR. This is the third product under the AMR (Aston Martin Racing) banner, after the previous-generation Vantage AMR and the very limited edition V12 Vantage AMR Pro.

Utilising a subtly upgraded version of the 5.2-litre twin-turbo V12 from the standard DB11, power has been lifted by 30bhp to 630bhp. This makes the DB11 AMR the fastest Aston Martin on sale, reaching 62mph in 3.7sec (0.2sec quicker than a standard V12 DB11) and able to hit 208mph (8mph faster). A more vocal exhaust system is also fitted, emphasising the AMR’s role as a sporting coupe, rather than a more relaxed GT. The chassis has been tightened, too, but without, claims Aston, affecting the DB11’s supple ride.

> Click here for our drive of the Aston Martin DB11 V8

The AMR can be picked out from lesser DB11s by its numerous styling changes. Gloss black for the roof, grille, sills and splitter are key identifiers, likewise darker finishes for the lighting units. There are also 20-inch forged wheels borrowed from the new Vantage. 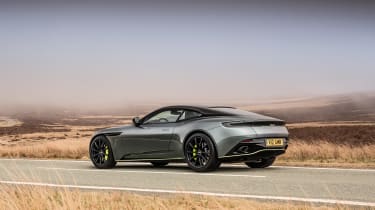 In the cabin there is standard fitment of carbonfibre trim on the doors and dash, as well as a new black Alcantara and leather interior combination, finished with a high-contrast lime green stripe down the centre of each seat.

For those after a little more exclusivity, Aston Martin is also offering the DB11 in three ‘Designer Specifications’, each combining bespoke exterior and interior colour and trim options, including just 100 units in AMR’s signature Stirling Green and Lime livery.

With the new Vantage and upcoming DBS Superleggera sitting either side of the DB11 range, Aston Martin couldn’t push its GT too far into supercar territory. However, with both those models only offering seating for two, the DB11 AMR does have a place, and might well be our pick of the DB11 range when we get to drive it later in the year.