The new DB11 is Aston Martin’s long awaited successor to the DB9, and the first in what will be a completely fresh, Andy Palmer-led product line-up from the British manufacturer. Looking undeniably like an Aston Martin, it takes cues from both the One-77 and Vulcan trackday car, but wraps it all up in a more sophisticated GT package.

The interior is the biggest leap forward, however, with a new design to the cabin and both hardware and software lifted from Mercedes (albeit clothed in Aston leather). Whether using it day-to-day or on a long, cross-continent journey, having a satnav, radio and Bluetooth connection that are all easily navigable makes the new DB11 feel like a much more habitable place to spend time compared to any other recent Aston. 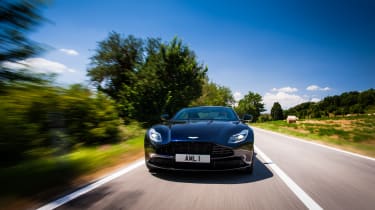 With Palmer confirming that he wants to see more distinction between Aston Martin’s model line-up, the DB11 has a much stronger emphasis on comfort and refinement than its DB9 predecessor. Decisions like fitting a torque converter automatic transmission and long travel suspension support this claim and go some way to giving the DB11 a distinctly relaxed character on the road.

If you are concerned that means the new Aston Martin DB11 has become a little old fashioned then don’t worry; the new DB11 is a properly modern piece of kit. The turbocharged engine develops a relentless stream of power, in turn lending the car a newfound sense of effortlessness to your progress – one that not even the DB9 could match.

Performance and 0-60mph time > The DB11 may be the GT of the range, but thanks to that new engine and its excess of mid-range grunt, it will still hit 62mph in 3.7sec.

Engine and gearbox > The downsized engine may lack the capacity of the old V12, but the new 5.2-litre twin-turbo unit monsters the old engine for torque, yet pleasingly still rewards you for taking it to the redline.

Ride and Handling > Refreshingly free of performance car rhetoric, the DB11 resolutely sticks to the GT brief. The DB11 is hugely capable; not thrilling like its sportier siblings, yet one that would happily transport you and a friend to the Italian lakes without breaking a sweat.

MPG and running costs > The headline figure of 24.8mpg sounds impressive in the company of other twelve-cylinder GTs, but make no mistake, this is still a big, luxurious and expensive way to get around.

Interior and tech > The first Aston Martin to fully benefit from the recently formed technical partnership with Mercedes-Benz, in-car tech is vastly better than in previous cars. It’s also more spacious, although still a 2+2 rather than a full four-seater.

Design > Aston Martin has aimed to bring the GT coupe right into the 21st century with the DB11. While not all the design elements are entirely successful, it does exhibit plenty of clever aero tricks. 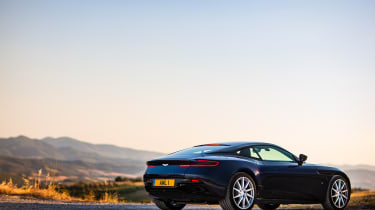 The Aston Martin DB11 occupies the high upper echelons of the car market, where it sometimes seems as though a car’s specification (and price) is only bound by the limits of your imagination. If the varied, standard palette of paints and trims miss the mark – we can't see how (see Yellow Tang paint) – you can always call on the crafts men and women of the ‘Aston Martin by Q’ department, who can add a real unique personal touch to your DB11, at a price of course. In other words, a £200k+ DB11 is possible so restraint is required to stop the final price spiralling skywards.

The smooth salubrity of twelve-cylinder motoring is quite a rare thing these days but the DB11 doesn't have the market cornered. Bentley has rolled out a new Continental GT at last – British manufacturers do take their time (the DB9 lived on for twleve years) – and the bigger engined DB11 is priced on par with the W12 GT. It’s likely to have its hands full with the Crewe-born mile-muncher.

Driving a prototype example of the Continental GT, we were delightfully impressed. The cosseting qualities remain, lulling you into a state of uninterrupted relaxation, but now there's a sportier side to indulge in too. Use of performance pursuing technologies such as the 48-volt active anti-roll system has lent the Bentley a much more responsive and playful character when you do decide to turn up, or off all the driver aids accordingly.

Mercedes-AMG will sell you a budget option, the S63 Coupe, hovering at the £130k mark. The twin-turbo V8 is out muscled by both Brits, sporting 577bhp but it does boast the same torque output as the Bentley, some 146lb ft more than the Aston Martin. Surprisingly the S63 is also as involving as you could realistically hope a two-tonne-plus GT to be.

If your pockets are deep enough and you care more for the osteopathic health of second row passengers, Ferrari’s roomier GTC4Lusso T is worth a look. A bonafide grand tourer and an exciting drive; the ride fails to round-off yumps and bumps with the same ease as those mentioned above. 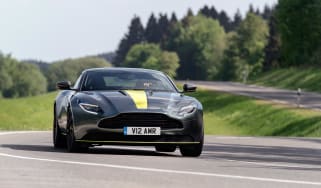 Aston’s uber-GT earns its stripes, but hardcore comes at a cost
Visit/aston-martin/db11/21243/aston-martin-db11-amr-revealed-brings-a-sharper-edge-to-top-of-db11-range 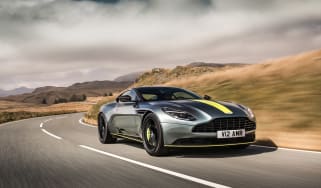 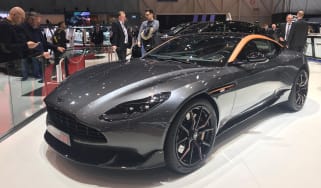 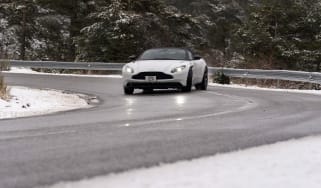 Aston Martin DB11 Volante review - the DB11 at its best?

The sweetest DB11 to drive so far, and a chunk more practical than the last Volante, as well.
Advertisement
Visit/aston-martin/db11/20666/aston-martin-recalls-db11-to-rectify-unintentional-airbag-deployment 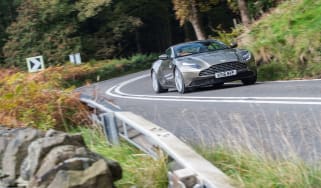 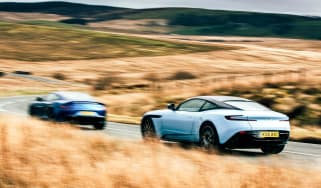 The Vanquish S and DB11 are both V12-engined super-GTs, but one is naturally aspirated, the other is the first turbocharged Aston Martin.
Visit/aston-martin/db11/20078/aston-martin-db11-v8-review-is-less-still-more-when-applied-to-a-suave-gt 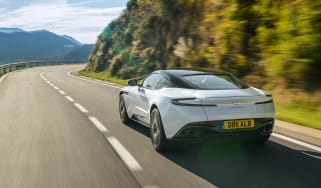 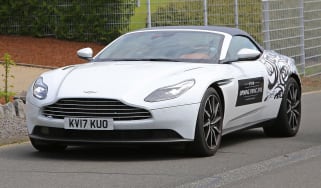 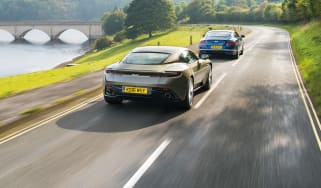 With input from Mercedes-AMG, can the new DB11 help Aston Martin seriously challenge the Bentley Continental in the luxury GT market?
Visit/aston-martin/db11/18895/aston-martin-to-debut-bespoke-db11-by-q-at-geneva 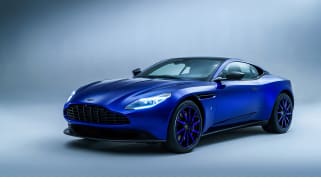 Aston Martin to debut bespoke DB11 by Q at Geneva

Personalisation service has turned its hand to the DB11; will go on show alongside Vanquish S and AM-RB 001
Advertisement
Skip to HeaderSkip to Content