With input from Mercedes-AMG, can the new DB11 help Aston Martin seriously challenge the Bentley Continental in the luxury GT market? 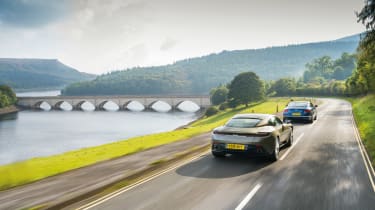 Let’s start with the Bentley. And it starts well. This is a deeply, deeply handsome car, evolved beautifully from Dirk van Braeckel’s original of 2003. You approach it, stroke the impossibly even paint, feel the weight of the door and notice the double glazing as you open it. The cabin is magnificent, too. Luxurious, of course, and unmistakably Bentley. The infotainment system, however, is poor in presentation and operation, and has aged badly.

You hear a wooompf as the engine starts – distant and slightly aloof. Four words, it turns out, that characterise the Bentley as a whole. As you move off, you’re instantly aware that the twin-turbo W12 is a prodigious engine. Brutal even, but with an inherent refinement that encourages you to stretch it to the limit in any gear. This is a wildly fast car; the second-fastest Bentley has ever made, after the bonkers Supersports. From a standstill to 100mph takes just nine seconds, while the top speed is 206mph. And the eight-speed ZF automatic transmission, mated to a 40/60-split four-wheel-drive system, makes deploying the W12’s 633bhp and 620lb ft of torque a cinch. Everything is easy in the Bentley and feels intentionally so, as if the car is always saying, ‘I’ve got this.’

On the flipside this means that the GT Speed is not particularly expressive. It would rather the driver did not indulge in agitating the tyres beyond the limit. This limit is far higher than you’d imagine – certainly for a car weighing well over two tons – and the stiffer air springs and bushes on this Speed model do indeed yield a little more agility. However, there’s little to learn, discover or enjoy on or over the limit – the Continental is starkly neutral in its handling habits and demands a driving style that combines pace with smoothness. And this is not without reward; many will enjoy the Bentley’s aura of invincibility and the indomitable way it covers ground. 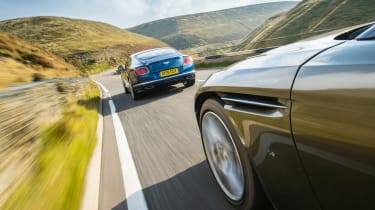 It certainly makes the Speed a peerless GT. In Comfort mode the ride is optimised, but spirited driving is discouraged by lumpen body movement. Fortunately, three further modes allow you to feel the benefits of the Speed’s lower ride height, 15 per cent increase in front camber angle and stiffer anti-roll bars. As you ramp up through the modes, extraneous slack and wallow are mostly suppressed and body control is improved, yet the ride remains decent. As there’s little or no ride or noise penalty, the stiffest mode – Sport – feels more like it should be called ‘GT+’.

The rest of the Bentley’s dynamic package has a similar aura of refinement and containment. The auto ’box is excellent, and the long gearshift paddles, knurled on their rear faces, are simply delightful to use. This is a transmission that is satisfying to manipulate – although never, of course, to the same degree as a manual – by riding the torque curve and short-shifting to sustain an even degree of thrust. The bonus is that when you hold a gear and allow the engine to sing, there’s a very real and very visceral rush to the red line. Downsides? Well, the exhaust and intake notes aren’t especially stirring.

Both the hydraulic steering and braking share similar traits. Inputs need to be deliberate, as there’s a reassuring weight to the controls, and while feedback is muted, neither feels completely numb. 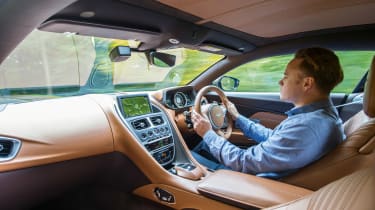 So overall the GT Speed is excellent. It is handsome, beautifully made, fast and stable. Hell, it even smells nice. However, you feel that it gives immense ownership rather than driving satisfaction, which in our world means it has left the door wide open for the Aston Martin to charge through and claim the ‘Best GT’ title. The surprise is that the more driver-focused DB11 doesn’t comprehensively trounce the Conti.

Aston Martin’s newest car expresses more athleticism in its appearance than the Bentley. It’s a frisbee rather than a hammer, and looks like it is perpetually racing towards a bullseye. Neat features include the lift-reducing ‘Curlicue’ vent behind each front wheelarch and the ‘virtual spoiler’ at the rear. The latter ducts air through channels that begin at the base of the C-pillars and exit through a slot in the bootlid. According to Aston, this ‘jet’ of air reduces lift.

The DB11 is equally impressive beneath the skin, too, and that’s not something we’ve been able to say about Astons of late. Lift the huge bonnet (the largest single aluminium pressing in the automotive industry) and you’ll find the smallest details neatly arranged. There’s even a diamond-quilted under-bonnet heat shield. In gold. 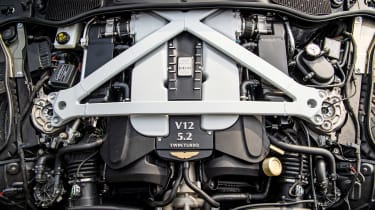 Perhaps the weakest design element is the ‘floating roof’ effect. The Aston design team can’t be pleased that a Vauxhall (the Astra) and a Hyundai (the i20) carry a similar signature.

The DB11’s interior has created a bigger stir than the exterior, mostly a result of the blending of Aston Martin design sensibilities with Mercedes electronics. It’s a mostly successful union, although many will mourn the passing of the wider ‘waterfall’ centre stack motif (I do). The ‘brogue’ pattern for the seat and roof leather, however, is a stunning feature and the steering-wheel ergonomics are spot-on. You sit lower than in the Bentley, too, which is a very good thing.

The engine starts with a hollow yowl, and any thoughts that it won’t sound like a proper Aston V12 because of its twin turbos are swiftly eradicated. This engine feels more immediate than the Bentley’s W12; busier and more feral. Instantly refined, too. However, passers-by will have more of the V12 music than you. From the outside, the DB11 sounds far more race car-like than it does on the inside – we wish a little more of that music reached the driver. 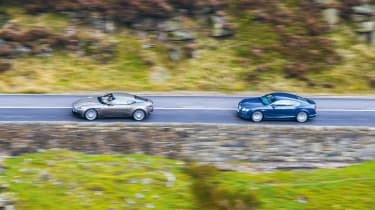 As you move off, the slickly consistent electric steering gives more feedback than the Bentley’s. This feel remains throughout the grip spectrum, certainly at sane road speeds. It’s only when the front tyres are at the absolute limit of grip that you wish they could be a little more talkative. The rack is perfectly geared, too – quick either side of centre but stable at high speeds. High marks for the steering, then.

The rear axle scores equally highly. The DB11 has a mechanical limited-slip differential and torque vectoring (via the brakes) and there’s a wonderfully organic feel to it. In particular, the rear axle is utterly harmonious with the front. Steering with the front or the rear (or both) always feels natural, and thus you can encourage more movement – and have more slip options to exploit – than in the Bentley.

The DB11’s torque vectoring makes itself known, mostly, by resisting understeer at the extremes of front-end grip – levels that I’d wager are at least as high as in the four-wheel-drive Bentley. However, you’re unlikely to venture into this territory much on the road, and you’re unlikely to take a DB11 on track, so you have to wonder why – other than fad and marketing potential – torque vectoring is fitted at all. 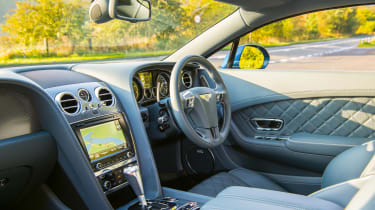 When we drove a DB11 to Tuscany earlier this year (evo 226), we benefitted from mostly smooth tarmac. This time it’s different. The UK’s roads are getting worse, and the DB11 doesn’t cope with them as well as the Bentley. That’s not to say the Aston doesn’t ride well – it does. But its loping, long-travel feel is far more suited to graceful, smooth progress on undulating or unwrinkled surfaces than the staccato lumps and ridges of British B-roads. The Bentley, you sense, is simply smashing any of these bumps back into the earth.

It’s worth noting that the DB11’s suspension and powertrain behaviours remain mostly consistent whether you’re in GT, Sport or Sport+. The car’s baseline is sporty, and only small degrees of added sportiness are introduced. We’re told this was intentional; Aston Martin did not want big steps between modes. Some owners – possibly former Bentley drivers – may prefer a little more bandwidth, particularly at the comfort end.

Instead, to find alternative personalities in the DB11’s dynamics you tend to mix ‘n’ match the powertrain and suspension settings, which are independently selectable. For instance, GT mode on the suspension side and Sport+ for the powertrain makes for an incredibly competent, confidence-inspiring chassis, particularly when the road-surface topography is mixed. 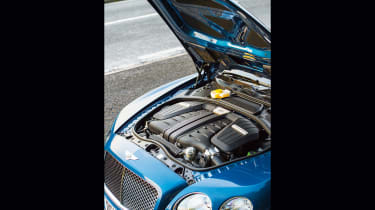 That 600bhp twin-turbo V12 is a gem. Smooth, punchy, responsive – if this is the future of downsizing, we’re in. Don’t be fooled by the bigger power and torque figures of the Bentley (it has a 33bhp and 104lb ft advantage) – the Aston’s lower kerb weight yields a significantly higher power-to-weight ratio.

If there’s a fault, we’d prefer to stack a little more torque higher in the rev range, as in mixed conditions you can often feel the rear axle drive into the traction control, but overall Aston’s first twin-turbo is a peach.

So now the verdict. After a week in both cars, driving in all conditions and including a wonderful day on the Snake Pass, it’s clear that the DB11 is the drivers’ choice among big, 12-cylinder GTs. However, the Bentley runs the contest far closer than you’d expect. The Continental GT Speed’s is defined by how it radiates total control. It operates at the highest level, but with plenty in reserve. This aura of confidence rubs off on the driver, and you bond with it as you would your closest and most dependable friend.

But we’ve all got another friend who we turn to when we want to have a little more fun – and that’s the DB11. It can’t match the GT Speed’s total refinement, or sense of indomitability, but it can return fire with better steering and more expressive handling.

On the engine and performance side, it’s a draw, and you’ll have to make up your own mind on the styling and interior. So the DB11’s victory is down to the fact that when you want to drive it – really drive it – it responds in kind.

Some were expecting a revolution with the DB11; perhaps this was unfair. After all, it’s not like Astons of recent years haven’t been dynamically at the top of their game. Instead the DB11 benefits from evolution and is, for now, the best GT of its type you can buy. 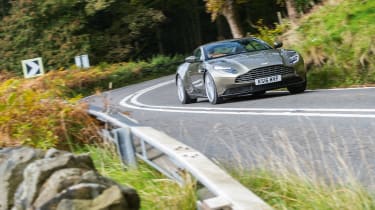 The Aston Martin DB11 is now the world's best luxury sports GT car, but it's not necessarily the revolution some were expecting. 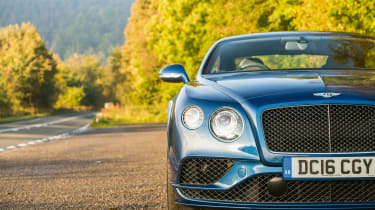 It's perfect for when you want to go very fast, very comfortably, and the Bentley surprises with its fleetness of foot, but it's almost too cossetting to match the DB11 as a driver's car. 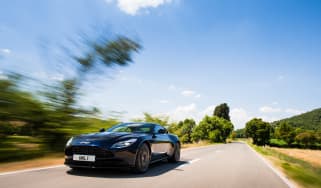