626bhp W12 makes for the most powerful production Bentley ever 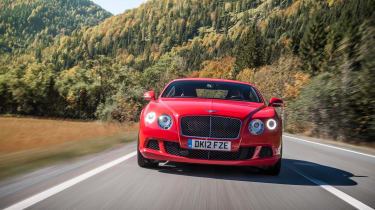 Bentley likes the fact that it still produces cars with 12-cylinder engines. It’s keen to promote the intrinsic value of the ‘W’ offset cylinder configuration that makes its particular brand of multi-pot hedonism relatively compact and more rigid than a conventional V12. And it likes the fact that, while the Crewe operation may be a small cog within the vast VW Group, it has been declared the Group’s Centre of Excellence for the W12. Visit the factory and the sense of pride shared by the people who work on this engine is palpable.

Some might argue that this chunky powerplant, whether turbocharged in a Bentley or naturally aspirated in an Audi A8, is a decadent anachronism and has, in any case, been usurped for relevance in the modern world by the more efficient and cleaner Audi-sourced V8 that powers slightly less costly Conti GTs and GTCs. After all, the Continental GT we’d really like to take for a blast down a long and winding road, the GT3-R, uses the V8 and is being touted by Bentley as a defining moment in the big coupe’s eight-year production life – at least when it comes to accelerative prowess and chassis dynamics.

But, for all that, there are a couple of things about the latest 6.0-litre, twin-turbo W12 as fitted to the mildly overhauled Conti GT Speed, and its soft-top GTC sibling, that melts rational considerations like snowflakes on a barbecue. One is 626bhp at 6000rpm. The other is 605lb ft of torque at 1700rpm. What it means is that the assiduous weight-paring measures applied to the GT-R to make the most of its 577bhp can be looked upon with detached amusement by W12 Speed customers who, presumably, don’t just want it all but want it all with knobs on. And that doesn’t come lite. In fact, it weighs 2.3 tonnes.

Of course, GT3-R drivers will own the 0-62mph bragging rights: 3.8sec versus 4.2sec for the Speed coupe (4.4 for the GTC). But the 12 gets to 100mph in an improbable 9.0sec and eventually gets the upper hand, surging imperiously on to a claimed top speed of 206mph (203 for the soft-top), making it the fastest production Bentley ever. As a finale to the car’s launch in Scotland we hit (with a bit of a run-up) an indicated 182mph on a 1.7-mile stretch of tarmac running parallel to the main runway at Campbeltown airport, so the claim seems realistic. Even more impressively, the Speed felt almost hands-off stable at that speed and the way the optional carbon-ceramic brakes sent the speedo into reverse at the end of the strip was frankly incredible. But then they do cost £10,000.

The W12’s prodigious outputs are, as before, fed through an eight-speed ZF auto transmission to all four wheels with the bias split 40/60 in favour of the rear axle. Ride height is lowered by 10mm compared to the regular GT’s and there’s a 15 per cent increase in the front camber angle in conjunction with stiffer air springs and bushes. Press a button on the centre console and you can choose one of four chassis settings on the touchscreen in the middle of the dash. ‘Comfort’ is purely for wafting, maximising ride comfort but pretty hopeless if you really want to exercise those 626 horses in anger. ‘Sport’, on the other hand, is the business, eradicating almost every vestige of slop and wallow and introducing a level of precision and body control that almost beggars belief for such a heavy car while retaining a perfectly decent ride. The combination of effortlessly mammoth thrust, unerring grip and sufficient AWD traction to squirt you back onto the straight bits with the throttle pinned to the floor endows the Speed with point-to-point pace that wouldn’t disappoint behind the wheel of something low, snarly and Italian.

We’ve always been fans of the GT Speed. It may not look much different in its latest guise, but it still delivers.

The Bentley Continental GT Speed costs £156,700 and is on sale now.