Not the classically elegant 2+2 coupe its predecessors were, but spec wisely and the DB11 will still turn heads for the right reasons.

Along with the other Aston Martin firsts introduced by the DB11, it was also the car that debuted a reformed design language under the design leadership of Marek Riechmann. That design language has now been spread across the whole range, and in the process the DB11 has matured into the sophisticated and elegant design Reichmann had envisioned. So long as it’s specified properly.

The front end is defined by the typical Aston Martin grille, bordered by new all-LED headlights and the biggest clamshell bonnet in the business. From here back, the bodywork then contorts and tapers towards the swollen rear arches terminating in a flat rear end that eschews the typical boot flick seen in older Aston Martins. 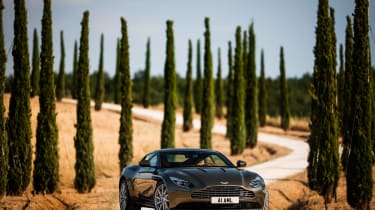 Reichman also decided to visually split the body from the roof section, offering ‘roof strakes’ as Aston calls them, in a contrasting silver or black finish. Combined with small tail lights, the DB11 is more colour sensitive than its more svelte predecessors.

The DB11 Volante is certainly the most successful example of the DB11’s design though, with that controversial roof removed in favour of the compact folding soft-top. Without the visual weight above, the DB11’s aggressive hips have some room to breathe while the redesigned rear deck gives the overall design more structure through the use of deep profiling that frames the cabin. It all looks very well resolved, and when paired with Aston’s flamboyant interior finishes is every bit as glamorous as one would expect of a drop-top Aston Martin. 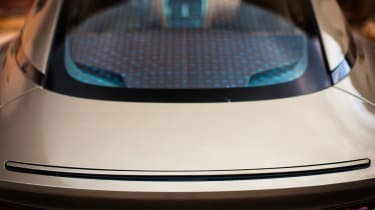