Refinement specialist Startech to debut its upgraded DB11 at the 2018 Geneva motor show. 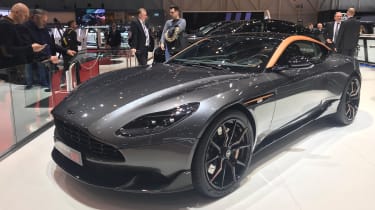 Startech, a subsidiary of renowned Mercedes-Benz fettlers Brabus, has announced its Aston Martin DB11 V8 SP610 ahead of the car’s public debut at the 2018 Geneva motor show. A visual makeover is joined by further upgrades that elevate the V8 DB11’s performance beyond that of the V12 version.

Under the bonnet is a lightly modified version of the ‘M177’ Mercedes-AMG-derived V8, which Startech’s parent company, Brabus, is of course well acquainted with. So it’s no surprise Startech has liberated extra performance with relative ease. New maps have been written for the ignition and injection systems, while the boost pressure on the two turbos has been turned up, too.

The newfound performance is accompanied by a bespoke exterior that lends the SP610 a more aggressive, carbonfibre-orientated aesthetic and offers some aerodynamic improvements, too. There’s a chiselled front splitter that reduces front-axle lift at high speeds, along with more pronounced sills and an F1-inspired rear, all of it constructed from carbonfibre finished in high-gloss, matt or gloss-black at the customer's choosing.

The show car (pictured) receives the full works, arriving with copper accenting on the roof’s edges and side-vents. The contrasting hue also extends to the two-tone, 21-inch Startech Monostar wheels that are shod with Pirelli P Zero tyres.

Startech’s efforts to enhance the DB11 continues inside: this specific example combines grey leather with carbonfibre trim pieces finished in dark chrome and copper. Other intricate details such as the stitched headlining and headrests embroidered with the SP610 model designation showcase the level of customisation Startech is willing to offer customers.  However, Startech is yet to reveal prices for the upgrades.