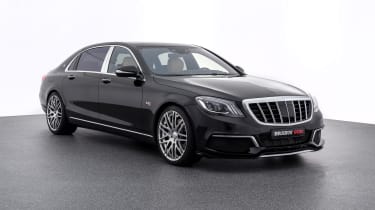 First up is the the Brabus B40-700 PowerXtra package, which is available for the S 63 S. This upgrade boosts power and torque for the twin-turbocharged 4.0-litre V8 to 691bhp and 701 lb ft respectively - the standard model delivers 603bhp and 664lb ft. The upgrades are largely down to a software rewrite for the engine management system, which includes revised injection and ignition maps, and a recalibration of the electronic boost pressure control. The 0-62mph sprint takes 3.3sec, a whole second faster than the standard car, while top speed is raised to a claimed 186mph.

If these Porsche 911 GT2 RS-rivalling figures leave you unmoved then Brabus can sell you the 217mph Brabus 900. Based on the luxurious Mercedes-Maybach S 650 it features a comprehensively reworked V12 that has boosted power to a heady 888bhp and torque has swelled almost 50 per cent to 1106lb ft, coming on stream at 5500rpm and 4200rpm respectively. The rear-drive layout prevents the 900 from launching as cleanly as the four-wheel drive B40-700, meaning the 0-62mph dash takes 3.7sec.

Brabus has worked much harder to achieve the performance increases on the 900. For starters, the 6-litre engine has been stroked and bored out to 6.3 litres, while a custom, machined crankshaft has been fitted, too. A new intake system incorporating a redesigned radiator and new air filter box supply air to the new turbos, which house bigger compressor and turbine elements. A stainless steel exhaust system and brand new, bespoke exhaust manifolds help the V12 breath as freely as possible to best harness the benefits of the uprated turbos.

Both cars wear aerodynamic, carbonfibre bodywork additions, which have been honed through wind-tunnel testing to deliver functional aero gains. The lightweight add-on also offer the pair a distinct visual upgrade over the cars they are based on. Inside, the familiar opulence of the flagship Mercedes saloon remains - the only real change is a unique reprofiled Brabus centre console. There’s also the choice between quilted leather or Alcantara interior and wood or carbon inlays as well.

Brabus hasn’t yet released pricing for these two models, but it has revealed that both will be covered by a comprehensive three year and 62,000 mile warranty.