All DB11s have huge performance. Both V8 and V12 models use their excess of torque to impressive effect

The DB11 is a quick car in all its forms, thanks to a consistent combination across the engine range of big-torque figures and the sharp shifting transmission. The entry-level V8 coupe will hit 62mph in just 4sec, which might only make it as quick on paper as a 911 Carrera, but it’s more than fast enough to never feel anything less than unstressed on the road. Thanks to the hot-V turbo layout, the power unit will pick up with incredible ease in the mid range, giving the DB11 an impressive surge of acceleration no matter the situation.

The V12-powered AMR is unsurprisingly the faster car, reaching 62mph in 3.7sec, but the difference at road speeds compared to the V8 is less pronounced. That’s because while the AMR has a chunky 130bhp power advantage, torque is only marginally up by 16lb ft, a figure further blunted by the AMR’s slight increase in weight.

Unlike some modern turbocharged units though, the V12 rewards you for exploring the upper reaches of the rev range, while eliciting that trademark Aston Martin bark. In fact the car is far louder outside the cabin than in, which is just about the only reason you would want to get out. Get the V12 into the upper echelons of the rev-band and its power advantage is clear though. 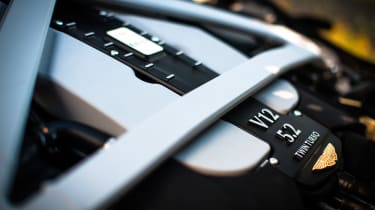