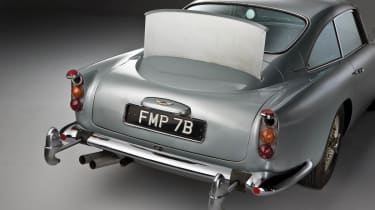 Star billing at the October 2010 RM London auction went to James Bond’s 1964 Aston Martin DB5 from Goldfinger, which sold for nearly £3million. But other highlights included an unused Pagani Zonda R, a slightly leggy Ferrari Enzo, a Vector W8 and a beautifully presented Ferrari F40. Here’s our round up. The 1992 Vector W8 twin turbo was estimated at £150,000, so the Jersey-based seller must have been pleased when the hammer came down at £160,000 (plus 12 per cent commission). As the car was also Jersey registered, VAT needed paying (at an agreed rate of five per cent) so the actual price paid was £188,160. As one canny dealer commented to me after the hammer came down, ‘I think the new owner will have that car forever as he’ll never be able to sell it for that again.’ Top money then. Next up was the beautiful 1971 Lamborghini Miura SV Jota guided at £800,000-£1.1million. There were rumours circulating around the hall that this wasn’t actually a true Jota but an SV, which was later converted by the factory to Jota specification. This turned out to be correct and as a result, the bidding never really took off, reaching a final hammer price of £650,000 (or £764,400 once commission and VAT are added). It still seemed pretty good value to me for such a beautiful car. One of the bargains of the night seemed to be a 1972 Ferrari 365/4 Berlinetta, which sold for a hammer price of £115,000 (£128,800 commission paid) for no particular reason. Maybe the unusual light metallic blue paintwork put people off but this price is around £30,000 below what good Daytonas have been selling for recently. Lot 172 was a beautifully resorted Lamborghini Miura SV originally owned by Rod Stewart. There was fierce bidding for this car and the hammer eventually fell at £620,000 (£694,400 commission paid), just £30,000 less than the beautiful Miura Jota had sold for moments before.  The next lot to sell was the very first RHD Lamborghini Countach LP400 ‘Periscopo’ sold in the UK. Dating from 1975, the car eventually sold for £175,000 (£196,000). I was told in LHD this car would be worth at least £60,000 more as American collectors are hoovering up all the best examples at the moment.  Then came one of the night’s highlights, an unused Pagani Zonda R, delivered straight from the factory to RM’s auction room. With a strong guide price of £1.3-£1.4million but no reserve, this was going to be interesting. Bidding started at a lowly £200,000 but soon got going and topped out at £720,000 (£947,520 including 17.5 per cent VAT and commission). It was bought by Ferrari specialist Joe Macari on behalf of a German customer, apparently, and represents a healthy discount off the Zonda R’s official list price of £1.4million. A very tidy, low mileage Ferrari F40 was up next. Needing new fuel bag-tanks but little else, this sold for £282,500 (£316,400) to Tom Hartley, who was buying on behalf of a customer.  Following the F40 came a German supplied 2004 Ferrari Enzo, which had covered 9000 miles and came with a full service history. Guided at £640,000-720,000, the final hammer price of £575,000 (£644,000) might seem a little low but then Enzo prices have been on the slide all year as more and more customers decide to sell their cars in advance of it’s replacement’s arrival in a couple of years time. Next came the star of the auction, the actual Aston Martin DB5 used in two James Bond films, Goldfinger and Thunderball. Owned since 1969, the seller intends gifting all the proceeds to charity and all the chatter before the auction started was that RM had turned down an offer of £6million a few days before. Unexpectedly, the bidding never got going and after an opening bid of £2.5million, only one other bid of £2.6million was made. After a lengthy and uncomfortable silence from the huge audience who had come to see the sale, the auctioneer had no alternative but to bring the hammer down. With commission, the final sale price was £2,912,000: way, way short of expectations. Rounding the sale off in fine style was a lovely 1972 BMW 3.0 CSL ‘Batmobile’. Guided at just £35,000 it looked to be the bargain of the night. In the end, enthusiastic bidding saw it sell for £44,000 (£49,280 after commission), a price I’m sure the lucky owner will soon come to realise is brilliant value for such an iconic car.