A new V8 Vantage-based track car will be used in the upcoming FIA World Endurance Championship. 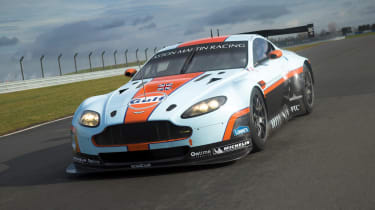 Aston Martin Racing is returning to endurance racing this year, with an all-new race car - the V8 Vantage GTE. It is scheduled to take part in the 2012 FIA World Endurance Championship, which includes the legendary Le Mans 24 Hours race.

The Vantage GTE is effectively a revised version of the original GT2 racer, built to comply with the ACO's new GTE regulations. With the exception of the the roof, every panel is made from lightweight carbon fibre, and features a state-of-the-art advanced aerodynamic package - designed using computational fluid dynamic techniques. The monocoque is reinforced with an aerospace specification steel roll cage, built to FIA standards, meaning overall weight comes in at 1195kg.

A modified version of the standard V8 is used in the car, but Aston Martin Racing has changed the cylinder heads, connecting rods, valves and camshafts adding a racing exhaust system to significantly boost performance. Power is transferred to the track through a rear-mounted six-speed semi-automatic sequential transmission and competition clutch.

'The GT category is also now the most competitive class in world sports car racing and with the new FIA World Endurance Championship the GTE class will, I believe, offer the closest fought and most exciting spectacle. We will see many premium sports car brands competing with great sounding racing cars based on their production models, which all the fans can relate to.'

As well as racing the car at Le Mans this year, Aston Martin is also hosting the Aston Martin Racing Festival, which will feature a 45-minute race at the Circuit de la Sarthe, for all owners of Aston GT competition cars on the weekend of the 80th Le Mans 24 Hours.