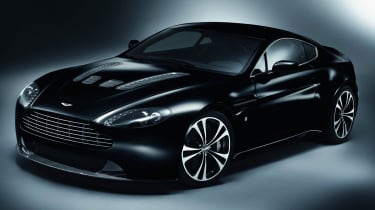 Aston Martin has picked a novel way to celebrate the sales success of its two V12 supercars – paint ‘em Carbon Black. Both the V12 Vantage and DBS have surpassed Aston’s initial sales expectations, and this pair of special editions intends to crank up their appeal. Each one has 50 man-hours of painting lavished upon it, with a finished effect of carbon and metallic. The V12 Vantage benefits from new diamond-turned, 10-spoke alloy wheels while the grille gets a new finish and front parking sensors come as standard. Both cars get lashings of Obsidian Black leather inside (with hand stitching from the people at Gaydon – lovely) plus a pair of carbonfibre and Kevlar seats, saving 17kg over standard. Pick the DBS and you’ll get a swish Bang & Olufsen stereo. If you’re wondering why we’ve not mentioned performance or mechanical upgrades yet, that’s because there aren’t any. Although we’d be surprised if you found the 510bhp 5.9-litre V12 that both cars share as standard too puny. Both cars are set to get a five per cent price hike over normal, making the Carbon V12 Vantage £141,750 and the DBS £175,350. Opt for the Vantage and you’ll get a free performance driving course thrown in, too. Watch our video of the V12 Vantage in action on Wales’s best roads Read about Simon George’s Aston Martin DBS long-term supercar Follow evo on Twitter or join us on Facebook for the latest car news