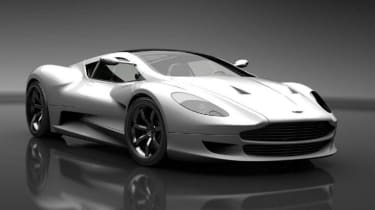 An Aston Martin costing 7.5 million euros? With a twin-turbocharged engine? And nigh on 1000bhp? Sounds amazing. And looks it, too (click the pictures right to enlarge them). But you’re right to be suspicious. This is the Aston Martin Super Sport, a specialist, coachbuilt supercar by Star Electric Cars France, a company more renowned for making electric golf cars that resemble Hummers, Bentleys and Astons as well as one-of-a-kind coachbuilds for rich car collectors around the world. This Super Sport will be mass production in comparison – there’ll be up to eight built. Though at over £6million a pop, there’s unlikely to be a high number of prospective buyers left disappointed. A twin-turbo 5.4-litre V8 sits in the middle of the car, producing 800-950bhp. The grunt is sent to the rear wheels via a six-speed manual gearbox (with a torque-sensing limited-slip differential), though a Formula 1-style paddleshift transmission is available too, apparently. Though key to the purchase for many will be those dramatic, hypercar looks. There’s plenty of Aston Martin styling cues present yet it looks like nothing in the British company’s current range. Browse the images on the right to pick the colour you’ll buy yours in…

Our inside story on Aston's official million pound car, the One-77