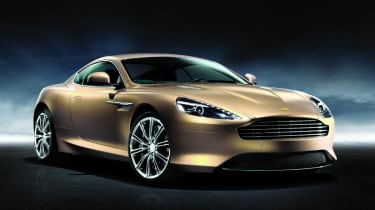 Aston Martin has revealed three new special editions. Unveiled at this week's 2012 Beijing motor show, the ‘Year of the Dragon’ edition range includes the DBS Volante, Virage Coupe and V8 Vantage S Coupe.  Called the Dragon 88, just 88 cars will be produced overall. They're finished in a choice of Volcano Red, Amethyst Red or Champagne Gold paint shades (inspired by Chinese art) while the Aston Martin badges are 24-carat gold. Aston Martin claims that the Dragon 88’s bespoke details ‘celebrate the mystical qualities of the dragon symbol, synonymous with power, strength and good luck in Chinese folklore’. Quite. The interior can be trimmed in Spicy Red, Chancellor Red and Deep Purple, while there’s new embroidered headrest designs, inspired by the ‘Nine-Dragon Wall’ in Beijing, and laser-etched sill plaques. Grilles, alloy wheel designs, and brake calipers are new and exclusive to Dragon 88 Astons too. There are no mechanical or dynamic changes for the 510bhp DBS, 490bhp Virage or 430bhp Vantage S. These special editions signal Aston Martin’s aim to expand its reach in China, with 11 new dealerships opening this year as the company aims to make the Chinese market its third biggest.