The Aston Martin Vanquish is updated for its 2015 model year, and it now tops 200mph 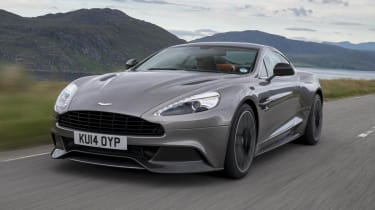 The Aston Martin Vanquish has gained a number of revisions and improvements for its 2015 model year.

The most significant change comes in the form of Aston’s new Touchtronic III eight-speed automatic gearbox. While the 5.9-litre V12’s power is up marginally – climbing 3bhp to 568bhp – the new transmission can likely take most claim for a half-second improvement in 0-60 time, the new car boasting a claimed 3.6-second sprint, making it the quickest accelerating series production Aston Martin in the company’s 101-year history.

Changes in the final gear ratios mean that the Vanquish is now capable of topping 200mph, too, a 201mph top speed a healthy 18mph up on the Vanquish it replaces. Fuel economy has also improved by around ten per cent, with a claimed 22.1mpg average.

Multiple gearbox modes range from ‘Drive’ to ‘Paddle Shift Sport’, while multi-ratio downshifts are available by pulling and holding the downshift paddle, the car selecting the lowest available gear, while Adaptive Drive Recognition (ADR) tailors shift points based on driving style. Elsewhere, there’s an update for the suspension, with new dampers that are 15 per cent stiffer at the front, and 35 per cent stiffer at the rear. The price is up £3000, the Vanquish now kicking off at £192,995.

The Vanquish is not the only car to benefit from these improvements, with the Rapide S saloon getting similar upgrades, including that new gearbox. Its 0-60 time also drops half a second, to 4.2 seconds, while it’s quicker than the Vanquish, posting a 203mph top speed. Prices start at £147,950.

As per usual with a facelift, the cars gain new colours, interior trim and alloy wheels.