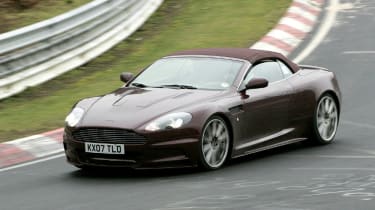 The first DBS haven’t been delivered to customers yet, and we already have shots of the soft-top variant, likely to be named the Aston Martin DBS Volante. We snapped the car undergoing handling-tests on the challenging German Nurburgring. While the steel roof will be replaced by a canvas top and the layout of the side windows will differ from those of the DBS, all other body components will be identical to the Volante’s coupé brother. To ensure a top-speed beyond 300 km/h, the same 6-litre 12-cylinder engine as in the coupé will power the cabrio, too. 517 bhp and a torque of 570 Nm will accelerate the car from standstill to 100 km/h in just a friction over four seconds – while the price is expected to be just a friction below 300,000 Euros.