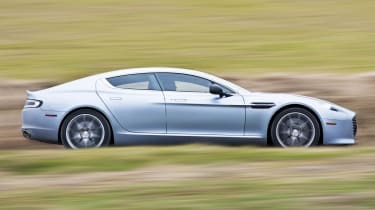 Aston Martin has released a new video, ‘Power of Luxury’, to promote the 2013 Rapide S. The video shows off the Rapide’s revised front end, as well as the Carbon Exterior Pack – an option that adds a carbonfibre front splitter, mirrors and rear diffuser. Aston says the Rapide S reckons the most beautiful four-door sports car on the market, and the video is a compelling argument.  The Rapide S – which replaced the Rapide saloon earlier this year – features a 5.9-litre naturally aspirated V12, producing 550bhp and 457lb ft of torque. This is 80bhp and 15lb ft torque more than the original Rapide, allowing a quicker 0-60 time of 4.9sec en route to a 190mph top speed. The interior now features piano black trim and the option of perforated red or blue leather bucket seats. A new ‘Q by Aston Martin’ service package offers custom bespoke cabin colours and patterns, demonstrated in the video via royal blue leather trimmed with white stitching.